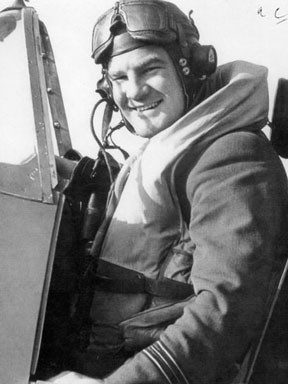 I joined the Royal Air Force in 1937, and set sail from New Zealand for England. In October of that year, I commenced flying training on Tiger Moths.

I passed through my pilot training successfully and was posted to No. 6 Flying Training School at Netheravon, to commence training on service aircraft. Here I flew Hawker Harts and Hawker Furies, a single seater fighter still in service with front-line squadrons.

A joyful six months flying on Gladiators followed. During this time I became fully operational, but not quite without incident. In the early part of my Gladiator flying I experienced complete engine failure at a height of 2,000 feet and was forced to land in the nearest field. A frightening experience at such an early stage of flying, however I not only got away with it, but I received a pat on the back for my effort. A great boost to my ego.

I flew a Spitfire for the first time in March 1939. It was a thrill I shall never forget. I continued to fly Spitfires right throughout the war, during which time I flew most of the various marks. I think I can fairly claim that at the cessation of hostilities there was no more experienced pilot on this aircraft. The versatility and deceptive toughness of this great fighter made it, I believe without question, the outstanding fighter aircraft of World War II.

It has always been said by my contemporaries that I bore a charmed life, but if I had not had a Spitfire strapped to my bottom for the whole of my operational career, I doubt that I would have survived. Tough as it was the Spitfire could not be expected to survive the treatment to which I regularly subjected it.

It causes me some embarrassment therefore to record that we parted company on no less than nine occasions. The fact that I survived was thanks to a great deal of luck and the reliability of the Irvine parachute. Nevertheless, I can say, I think with justification and not a little pride, that as a partnership we accounted for 22 enemy aircraft destroyed with numerous others, either ‘probably destroyed’, or ‘damaged’.

The fact that I became WWII’s top-scoring fighter pilot from New Zealand means far less to me than the knowledge that the overall contribution made by fighter pilots from my country was disproportionately high considering the small population of our small islands in the South Pacific.

My fighting war finally came to an end when I flew my last operational sortie over the Normandy bridge-head on D-Day. It was for me a fitting finale and a good time to say farewell operationally, to my beloved Spitfire. We had done much together, and what better moment to see out our time together than the invasion of France which signified the beginning of the end of the Germans.

No 54 Squadron has a special significance for me. It was my first operational Squadron, to which I was posted in 1938. With it I flew Gladiators, and subsequently Spitfires-during the Battle of Britain. It was at this time that I first met “Sailor” Malan, who became a legend in the war, and to my way of thinking, the best fighter leader in World War II. “Sailor” and I became close friends during our time together at Hornchurch, and when in 1943 I assumed command of the Biggin Hill wing it was at “Sailor’s” request as Station Commander at the time. 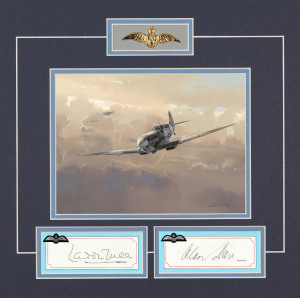 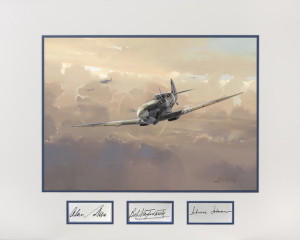