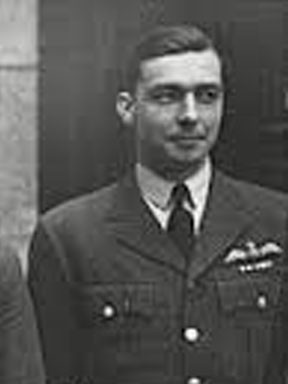 B. Tait, known to most bomber aircrew as ‘Willie’, entered the Royal Air Force as a regular officer via the Royal Air Force College, and was commissioned in 1936. He was posted to 10 Bomber Squadron, then equipped with Heyfords, and shortly after with the Whitley 1.

At the outbreak of war Tait was recovering from a leg injury, but in April 1940 returned to bombers and to 51 Squadron at Dishforth, equipped with Whitley IVs. In May he was made a flight Commander.

He recalls “… I see from my log book that in June I did 15 operations, mostly into Germany, as well as running the Flight which was no sinecure. On 11 June we bombed Turin, crossing the alps in terrifying thunderstorms. This was the day after Italy declared war …”

July was spent giving instruction to the replacement pilots, particularly on night landings. Navigation aids were minimal, flarepath lighting meagre, and liable to be switched off in an enemy raid. The crews needed all the extra coaching they could get.

During the rest of 1940 the bombing of Germany developed, and this included Berlin. The Whitley was the only bomber which had the range for such distant targets and 51 Squadron was continually in action. In December Tait was promoted to command the Squadron.

In January 1941 he performed his last task with 51 Squadron when he was given command of Operation ‘Colossus’ – the first British Army parachute operation. Tait recalls “I spent my longest tour on No. 51 Squadron, having joined it in April 1940. Equipped with the slow Whitley IV, we had the only aircraft capable of reaching the long range targets, and we bombed Berlin in 1940. I first became a flight Commander, and then commanded the Squadron. It was my most arduous tour, but there was a degree of loyalty and endeavour amongst the crews which I did not find again until near the end of the war with 617 Squadron”. When he left 51 Squadron Tait had been awarded both the DSO and DFC.

In February Tait joined 35 Squadron (the first to be equipped with the new Halifax) as a flight commander. Flying a Halifax, Tait led the daylight raid against Kiel on 30 June, for which he received a Bar to his DSO. In May 1942 he went to command 10 Squadron in the temporary absence of Don Bennett who had been shot down whilst attacking the Tirpitz at Trondjeim. It was with 10 Squadron during this time that he took part in the early 1000-bomber raids, and remembers that on the Cologne raid his aircraft lost an engine on the way out, making them about last over the target, after which another engine failed on the way home!

When Bennett returned in July of 1942, Tait moved to take command of 78 Squadron, the sister Squadron of 76, commanded by Leonard Cheshire. These two experienced bomber pilots co-operated very closely, and though Squadron Commanders were limited to one operation a month because of the casualties and shortage of competent commanders, both managed considerably more: Tait believed that it was not possible to hold morale without leading the Squadron in action.

In November 1942 he went to Headquarters Bomber Command where he wrote the Command Manual of Tactics, suggested the Emergency Runways, and devised a completely different system of crew gunnery training.

After 10 months he left to command a Wellington OTU training Canadian crews, and in March 1944 joined 5 Group as a master bomber. The night before D-Day he spent over the Cherbourg Peninsula with a force of 200 Lancaster under his direct control, eliminating coastal defence gun-emplacements, prior to the Normandy Landings. He was awarded a second Bar to his D.S.O. for this operation. In July he took over 617 Squadron from Leonard Cheshire.

‘Willie’ Tait led an inspired career in Bomber Command throughout the war, but he is possibly best remembered for his attacks against the Tirpitz. After several attempts, some in appalling conditions, it was Tait and his crews that finally sank the German battleship on 12 November 1944. He was awarded a Bar to his DFC and a third Bar to his DSO during the time he led 617 Squadron, and by the end of the war had flown over 100 operational sorties.

Willie Tait flew almost all the wartime bombers. He recalls:”… They were all inadequate for their purpose, being too slow and carrying too small a bomb load. They were originally designed for a conception of the war in the air which, in the event, was completely different to actuality. The best type of bomber is the smallest aeroplane, with the biggest engine, and able to carry the largest bomb. . .”. 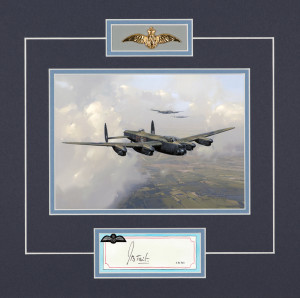