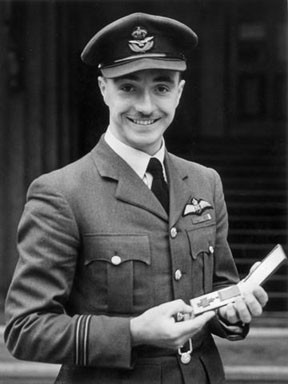 I volunteered for Aircrew in December 1940, soon after leaving school. I passed the physical but was not called up until August 1941, when I reported to A.C.R.C., London. My posting to I.T.W. at Newquay, Cornwall was like a holiday abroad for me, coming from Glasgow!

Next I really was shipped overseas, to Canada, for distribution to training units. Luckily our course was delegated to go to No. 2 B.F.T.S., Lancaster, California – we were therefore taught to fly to ‘wing’ standards on single-engined aircraft, Stearman, Vultee BT13, and AT6A (Harvard) and got our wings in June 1942.

Although, like most schoolboys, I had dreamed of being a fighter pilot when I first joined, having flown I wanted to go on to multi-engined aircraft. Fortunately for me, bomber pilots were needed when I got back from training. My first conversion unit was No. 6 P.F.U. (flying Oxfords), Little Rissington and eventually I went on to 29 O.T.U. at North Luffenham, to fly Wellingtons. It is here that one ‘crewed up’ for the first time and the feeling of fellowship really is quite intense.

After a period of operational training my crew and I were asked to stay on. I reluctantly became a screen instructor but we were offered a guaranteed Lancaster posting at the end of this spell which certainly seemed worth it.

In July 1943 we were posted to Wigsley, No. 1654 conversion unit to change over to Lancasters and made up our crew with an engineer and a mid-upper gunner. We were posted to 61 Squadron, Syerston in September 1943. We shared Syerston with 106 Squadron and along with a fair number of Canadians, Australians, and New Zealanders, we were a large and happy bunch. The local people too were very friendly and hospitable.

I was flying the usual operational sorties over Germany and reacted like most raw recruits in being rather tense until we had our target instructions. Beyond this point one had so much to do that there was no time to think of the dangers ahead. This fact, in my opinion, bears out my claim regarding my feelings on the night of the Dusseldorf raid of November 3rd that year. I chose not to turn back when we were shot up by the German fighters because we would have been flying against the wave of other Allied bombers. One makes what seems the right operational decision at the time and it does not seem ‘heroic’ as this incident was later described.

After this raid I spent 5 weeks in hospital and a further 3 weeks on sick leave. I next was told by A. V. M. Cochran that I was to join 617 Squadron at Woodhall Spa, where I reported on 13th January 1944. I formed a new crew with my Bomb Aimer, Les Rolton, who had received a DFC for his part in the Dusseldorf raid. We began training for individual target attacks, for which 617 Squadron was renowned. We practised continually high-level bombing with the Stabilished Airbomb Sight, which was very accurate but did not overcome visibility problems so we sometimes returned with our 12,000 lb. bomb still aboard.

We were involved in the D-Day operation, dropping ‘window’ anti-radar foil and creating a false impression suggesting that the raid was to come from a different direction. Our job done, we headed home for breakfast and, possibly, sleep. We felt very sorry indeed for the poor blighters we passed in their troop transports and gliders, heading the other way, many on a one-way ticket.

After a total of 25 operational sorties covering, for instance, 14,000 lb ‘Tallboy’ bombing raids on the Saumur Tunnel, various rocket installations and U-boat pens, we were hit by a stick of bombs over Rilly, east of Paris. Only Dave Luker, my Wireless Operator, and I survived. We were both picked up when we baled out.

I enjoyed the time spent with both 61 and 617 Squadrons and, though 61 was a very friendly and happy bunch to work with and the mixture of nationalities made it very interesting, I think I contributed most to the war effort with 617. We learned selective target bombing techniques and this enabled us, with the aid of such monsters as the 14000lb ‘Tallboy’ bomb, to wreak havoc on a succession of strategically important areas of Germany and her allies and occupied territories. At the Saumur Tunnel we managed an Aiming Point Photograph plotted and we also did a lot of damage to U-Boat pens, rocket installations and several other such sites.

I felt that in this way we were hastening the re-establishment of peacetime pleasures.

The Lancaster was the only aircraft that I flew on Operations but it really was a magnificent machine both in its performance and its lack of vices. When it stalled – even with a full load, as it could do before pitot head heaters were introduced to keep the airspeed indicator from icing up – it just settled down like a “broody hen”, giving you plenty of warning of what was going on. 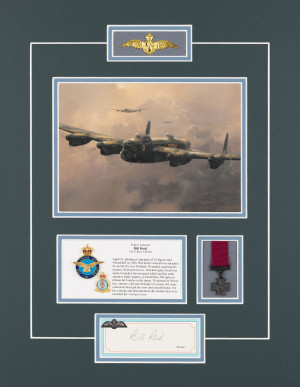 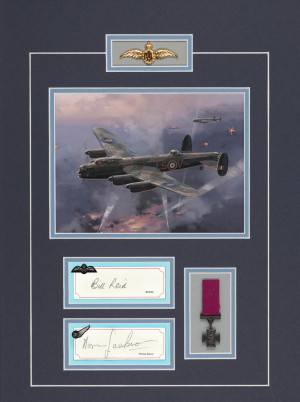 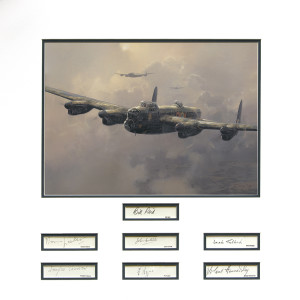