Following my father who was a fighter pilot in the Royal Flying Corps, I was commissioned in the Royal Air Force in 1938.

My initial flying training began with No. 4 E & R.FTS at Brough, Yorkshire, on Blackburn B.2 aircraft soloing after 4 hours 15 minutes dual instruction. Intermediate training took place at No, 2 FTS Brize Norton on the Hart series trainers, culminating in advanced fighter instruction on the Hawker Fury. Posting followed to No 66 Squadron at Duxford, the second RAF Squadron to receive Spitfires.

After the “phoney war” winter of 1939/40, I saw brief action at Dunkirk followed by combat in the Battle of Britain at Kenley and Gravesend. Having over 350 hours flying on the Spitfire, I considered this experience to have been of great advantage to me in the ensuing dog-fights with the Messerschmitt 109’s. Most casualties suffered by the squadron in this period were to the replacement pilots whose Spitfire flying experience often totalled less than 12 hours.

In September 1940 I took command of B Flight. The following month during a dog-fight with Mel09’s starting at 30,000 feet my elevators were shot away and I bailed out, landing with a partially deployed parachute near Tunbridge Wells. At the end of the Battle I was credited with nine enemy aircraft destroyed and one shared, comprising four Heinkel 111’s, one Dornier 17, one Me110 and three Mel09e’s.

Completing my first tour in April 1941, I then instructed on Hurricanes at No 59 OTU. I returned to operations in September 1941 as flight commander with 616 then 41 Squadrons in the Tangmere Wing.

Promoted to command No 91 Squadron at Hawkinge, I sighted and reported the German battle cruisers Schamhorst, Gneisenau and Prinz Eugen during the Channel Dash on 12 February 1942.

Transferred to command 72 Squadron at Biggin Hill, I probably destroyed a FW 190 over Calais. Assuming temporary command of 222 Squadron, I took part in the air cover for the Allied assault on Dieppe, returning to 72 Squadron which I led during operation TORCH invading North Africa.

For 5 months in Tunisia during 1942/43 I led 72 to the top scoring squadron of the campaign. Supporting 1st Army, fighter action was almost continuous in the period. 72’s tally was credited at 53 E/A destroyed, 20 probables and 50 damaged, together with numerous enemy vehicles written off. Of this, my personal score increased by 4 Me 109’s and a FW 190 destroyed; a Me 109 probable; plus, assessed as damaged, a JU88, a Macchi 202, a Savoia 79, 2 Me 109’s and a FW190. On 20 November 1942 I was hit in the oil tank by light flak when strafing enemy petrol supply vehicles, and crash landed in “no man’s land” near Beja, subsequently returning safely. In the period 72’s casualties were minimal with 5 pilots killed, 3 missing and 4 wounded.

After the very active Tunisian campaign I returned to UK for staff duty at Fighter Command. March 1944 brought promotion to Wing Leader 24 Wing with Nos. 91 and 322 (Dutch) Squadrons. For 2 months after D Day the Wing countered the V.I (Diver) assault on London, my personal tally being 4 Buzz Bombs destroyed.

Transferred to leading the Detling Wing comprising Nos. 1 and 165 Squadrons, air cover was flown for the airborne troops at Arnhem. Subsequently the Wing moved to Manston and provided cover for Bomber Command’s daylight strategic raids to Germany until VE Day.

In 1948 I led the 54 Squadron Vampire aerobatic team visiting the USA and Canada, thus flying the first transatlantic crossing by jet aircraft. After service in Malta and Egypt I graduated at the Royal Air Force Flying College. I then commanded the Air Fighting Development Squadron at Central Fighter Establishment. In 1953 I led the Church Fenton Meteor Wing (Nos. 19 and 72 Squadrons) on the flypast for the Queen’s Review of the RAF at Odiham. Subsequently I served on exchange duty in the United States flying the T33 the F86 Sabre together with the F102 and F104 Century series fighters. After tours at the MOD my last appointment was Commanding Officer RAF Gatow Berlin, from 1965 to 1967 and I retired in 1968.

During World War II I flew only the Spitfire, and had combat experience in Mks I, II, V, IX and XIV. In my opinion the Mark XIV was the best wartime service Spitfire produced. Powered with the Roils Royce Griffon 60 series engine, it had an overall performance superior to all contemporary British, American and German fighters up to its ceiling of 43,000 feet. A new bubble canopy gave much improved all round visibility, especially rearwards. The installation of two .50 calibre guns (instead of the original four .303 machine guns), together with the two 20 mm Hispano cannon ensured a much heavier fire power. 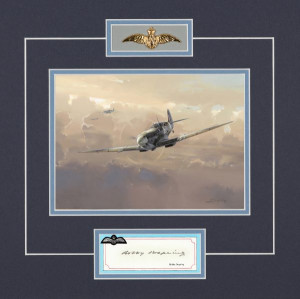