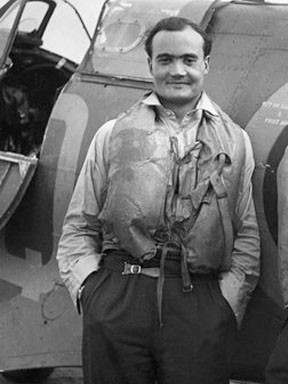 I joined the RAF with a permanent commission via the RAF Cadet College at Cranwell. I passed out in 1938 and was posted to 65 Fighter Squadron at Hornchurch. We were equipped with Gladiators when I arrived, but soon after, we were re-equipped with Spitfires. I was with 65 through the phoney war and half way through Dunkirk when I joined Bob Stanford-Tuck in 92 Squadron also at Hornchurch.

After Dunkirk we moved to South Wales partly for a rest and partly to look after the west Country ports and installations. We moved back to Biggin Hill at the end of August, when I became 92’s acting C.O., a position I held for the next six weeks until a bullet in the leg put me in hospital. During this time I led 92 on sixty-plus operations when the Squadron achieved the highest success rate of any Squadron in the Battle of Britain.

When I returned to 92 from hospital at the end of 1940 it had moved to Manston, with its new C.O. Johnnie Kent. However, we soon moved back to Biggin Hill when Johnnie Kent was replaced by Jamie Rankin, one of the great fighter leaders of WWII. Fighter Command now moved to the offensive, and most of this year we flew offensive sweeps over France.

In early 1942 after a rest at No. 61 OTU, I took over command of 72 Squadron at Biggin Hill at the request of Bob Stanford-Tuck, who had been promoted to Wing Commander Flying. 72 Squadron was dispersed to Gravesend, one of Biggin’s satellites, and it was from there that we were involved in one of the greatest fiascos (and tragedies) of the war – the escape through the English Channel of the three German capital ships, Scharnhorst, Gneisenau and Prinz Eugen. In June 1942 I was posted to Kenley, Biggin’s next door neighbour, as Wing Commander Flying, where we continued Fighter Command’s offensive role over France, the routine being relieved only by the Dieppe invasion. At the end of 1942 I was sent to Charmy Down near Bristol to found the Fighter Leaders’ School, and from there, in May 1943 I was sent to Malta.

Here I joined Desert Air Force, and was given command of 244 Wing, which had lost it’s Commanding Officer, Ian Gleed, in action over Africa. At this point in my RAF career I was a confirmed Flight Lieutenant, acting Squadron Leader, acting Wing Commander, acting Group Captain, and I think at 25 one of the youngest Group Captain’s in the Air Force!

244 Wing consisted of five Spitfire Squadrons, and was totally self-contained, self-sufficient and mobile. It could move under it’s own steam anywhere at any time and operate from almost kind of airfield. Its main function was the close support of the 8th Army under General Montgomery, and we followed them to Sicily and then Italy, and zig-zagged our way northwards behind them, taking part in three invasions and such historic battles as Anzio, Monte Cassino and the long-range cover of the penetration into the South of France.

When the enemy air activity diminished, we added dive-bombing to our normal fighter role. At the end of 1944, when we were just South of Venice, to my dismay I was sent, at the personal intervention of Air Chief Marshal Sir John Slessor, A.O.C. in C. MAAF, to Staff College at Haifa in Palestine, and from that, to 205 (Heavy Bomber) Group as Senior Air Staff Officer, flying Lancasters and Liberators, at Foggla in Southern Italy! It was a traumatic experience for both 205 Sqn and myself, for my entire career had been flying Spitfires and I didn’t even understand their language! Fortunately after a couple of trips as a gunner to try and find out what it was all about, the war ended. I stayed in Italy and then Egypt for about a year, engaged mostly in the re-patriation of troops, and then managed to get posted back to Desert Air Force to command 324 Spitfire Wing and spent a few very happy months at Zeltweg in Austria.

I have always regarded 92 Squadron as my personal property. Perhaps this is because I led it through what was to me the most exciting and enjoyable part of the war, the Battle of Britain at Biggin; perhaps because I had many very good friends in it; perhaps because of only two Squadrons (as opposed to wings) that I was a member of in sustained front line operations, (92 and 72), I was in 92 for a very much longer time.

92 also came back into my life in Desert Air Force, when it was one of the five Squadrons in 244 Wing which I commanded for nineteen or twenty months in Malta, Sicily and Italy.

After various staff appointments, including instructing at RAF Staff College, I was invalided out of me RAF with TB in 1954.

I was lucky enough to fly Spitfires operationally with front line units virtually without a break throughout the entire war. I flew the Mark II during Dunkirk and from Biggin Hill during the Battle of Britain, then Marks V and IX on offensive fighter operations from Biggin Hill and Kenley. I later flew the Mark IX in Malta, Sicily and Italy in Desert Air Force in support of the 8th Army. In fact, the Spitfire was the only aircraft I flew operationally, praise the Lord!