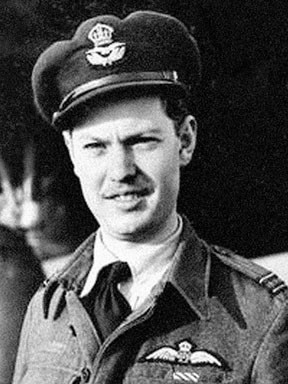 On my eighteenth birthday in May 1940, itching to get away from my job as an insurance clerk and into the fray, I presented myself to the RAAF recruitment centre in Adelaide, was passed A1 fit and told to await call up for Aircrew training. This soon came and I was posted to Western Australia.

My initial training was at Pearce, Western Australia, Elementary Flying Training in Tiger Moths from where I went solo after 11 hours. Service Flying Training in Avro Ansons was done at Geraldton. My authority to wear a Pilot’s Flying Badge was granted on the 24th July 1941 and qualification as a Service Pilot on 19th September 1941. Then to Embarkation Depot for kitting out as a Pilot Officer and on to England, via the USA and Canada.

Training continued after arrival in the U.K. with Advanced and Blind Approach Training courses at Cranwell and Swanton Morley on Airspeed Oxfords, followed by O.T.U. at Kinloss in Scotland in Whitleys.

During my first solo night flight in Whitleys doing circuits and bumps an engine cut at 200 feet just after take off. A great wide right hand circuit was made back to the runway for the single engined landing. The comment from my flying instructor back in the crew room was “… we never expected to see you back here, coffins don’t fly so well on one engine …!” From Kinloss I went to Heavy Conversion Unit at Wigsley in Lincolnshire and passed out on Manchesters and Lancasters. Finally to operations with 106 Squadron, Conningsby commanded by Guy Gibson where I arrived in June 1942. My first operational flight was to Bremen on one of the early 1000 Bomber Raids. During my time with 106 Squadron at Conningsby and later, Syerston, I took part in some of the first low- level daylight raids on Danzig, Essen, Le Cruesot and Milan, flying Lancasters.

I continued to serve in 5 Group Bomber Command completing 3 operational tours with Nos. 106 and 617 Squadrons, being continuously operational from June 1942 until July 1944 when I was forced to take a break by the A.O.C. 5 Group, The Hon. Sir Ralph Cochrane. A special tribute is due to the crew members who flew with me particularly my navigator Danny Walker of the R.C.A.F.

I was awarded the DFC after 36 operational sorties and joined 617 Squadron when it was formed in March 1943. A DSO was awarded for the famous Dams Raid where after being called off my run on the Mohne Dam as the breach became apparent I went on and was the first pilot to bomb the Eder Dam. Subsequently I was awarded a bar to my DFC for a raid on the Dortmund-Ems Canal when only 3 aircraft, (one of which had returned early), out of a small force of 8 returned home, (5 aircraft being lost). I had spent 40 minutes at low level in the target area in poor visibility being continually under fire from light flak while searching for the right place to drop my 12000lb, cookie. A bar to the DSO was awarded for a raid on Munich in April 1944 while flying a Mosquito as deputy to Leonard Cheshire. Probably something that meant as much to me as any award was a Green Log Book endorsement which read:

“While engaged on a low level bombing exercise in a Lancaster Aircraft the aileron control cable broke. In spite of this severe handicap, S/Ldr. Shannon maintained control of the aircraft, returned to base, and displaying exceptional flying skill, made a perfect landing“. G/Cpt. Philpott, Station Cmdr.

After an extended tour with 106 Squadron under Guy Gibson I volunteered for Pathfinders, was accepted, but hadn’t been there for 48 hours when Gibson called asking if I would rejoin him. I accepted immediately, proud to be selected as a founder member of 617 Squadron, and to be serving again under one of Bomber Command’s finest Squadron Commanders. Morale under Guy Gibson was always of the highest order and this continued when Leonard Cheshire took over the Squadron later on. I completed a further two tours with 617 flying Lancasters and Mosquitos. I became a Flight Commander when Cheshire took over the Squadron in October 1943.

I later served as a Wing Commander at the Australian OTU at Church Broughton from July 1944. After only three months I dropped rank to fly Yorks and Liberators on the trunk routes with Nos. 511 and 246 Squadrons in Transport Command until my demobilisation in December 1945.

After the war ended I joined The Royal Dutch Shell Group as a Management Trainee and after four years in Borneo from 1946-50 served in Venezuela, Egypt, London (on North African affairs), Colombia and Kenya. I stayed in the oil business until my retirement in 1984.

On my third tour I flew Mosquitos and found them a delightful aeroplane, however, most of my operational flying was in Lancasters. This was a magnificent machine, always capable of being up rated for power, bomb load, and in the case of the Dams Raid, withstood the special modifications required to carry Barnes Wallis’s Spinning Bomb. A really remarkable and versatile aeroplane, sweet to fly with no hidden vices.