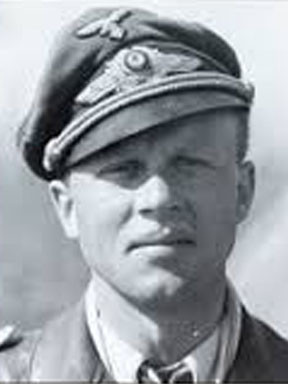 The words of Dieter Hrabak

Having been an unsuccessful applicant for commercial pilot training, on 8 April 1934, I joined the Navy as an Officer Cadet, a German Air Force job still being precluded by the Treaty of Versailles. The Luftwaffe was formed the following year, and on 1 November 1935, I transferred to this fledgling force. Pilot training followed at Ludwigslust, from where I was posted to Fighter Unit 232 in Bernburg, to fly the He 51 biplane.

When war started, I was a Squadron Commander, in the rank of Oberleutnant in the Viennese I./JG 76, flying escort missions and fighter sweeps from an emergency airfield in Upper Silesia. During the Polish Campaign, I only once met enemy aircraft in the sky. This was on 3 September 1939 when I attacked a flight of Polish light bombers, but before I started shooting, my engine was hit by the rear gunner. I belly landed my aircraft between the lines and hid in a nearby forest until picked up by an advancing German Armoured Unit.

My method of attack had been naive and had taught me a number of valuable lessons: think before attacking, familiarise yourself with the relevant enemy aircraft types, carry a hand weapon and wear your uniform (I had worn a sports shirt) in case of capture.

At the beginning of the French Campaign, my unit flew combat patrols above our fast-moving tank divisions, operating from an emergency airstrip near Trier. Flying four or five missions a day, I achieved my first aerial victory on 13 May 1940, over a French Potez 63, a twin-engined reconnaissance aircraft. When the battle against France had ended, I had achieved 5 more victories, mostly over Morane and Curtiss P-36 fighters. Just before the famous ‘Eagle Day’, I./JG 76 was incorporated into the new “Green Heart” Wing and my squadron became 4./JG 54. Promoted to Hauptmann, I took command of 54 on 15 August 1940 and on 23 October, after 15 victories, including 9 Hurricanes and Spitfires, I became the first JG 54 pilot to be awarded the Knight’s Cross. I had however, been shot down three times over England during the Battle of Britain, but each time managed to get my crippled aircraft back to the French coast for a belly landing. In November, JG 54 was withdrawn from the fighting to refurbish and re-train new pilots after heavy losses.

After the Balkan Campaign we received the new, more streamlined and powerful Me 109F, in preparation for the invasion of Russia. I flew in command of II./JG 54 from the outset of the Russian Campaign until November 1942 when, promoted to Major, I moved from the Northern to the Southern Region to take command of JG 52. Leaving the old Gruppe with Major “Assi” Hahn, I had achieved 51 victories for a total of 67.

The two year period as Kommodore of JG 52 was the highlight of my wartime career. Flying and fighting in the southern region of the Soviet Front meant air combat almost daily. With Erich Hartmann (352 aerial victories), Gerhard Barkhom (301), Gunther Rall (275), Wilheim Batz (237), Walter Krupinski (197), Johannes Steinhoff (176) and other pilots, I had excellent men in Gruppe and Squadron Commander positions. They made JG 52 into the most successful Wing of the Luftwaffe. By April 1943, the Wing had scored 5,000 aerial victories, and when I left JG 52 at the end of September 1944, it had achieved more than 10,000.

During my time at JG 52, the situation deteriorated badly, many German units having been withdrawn to defend the Reich and, in two years, we operated from more than fifty different airfields. In July 1943, I was promoted to Oberstleutnant and on 2 August achieved my 100th aerial victory, receiving the Oak Leaves to the Knight’s Cross on 25 November.

Promoted to Oberst, I returned in October 1944 to command JG 54 at a desperate time, when my staff and two Gruppen had been cut off by the Soviets at Latvia. The remainder were in the West. We escaped by air and sea in May 1945 and, at the war’s end, I entered British custody in Belgium, having flown more than a thousand combat missions and achieved 125 aerial victories, never having lost a drop of blood. I was lucky!

In France, when I scored my first victory, our Me 109Es were clearly superior to the French Morane and Curtiss fighters. However, flying over England, I quickly developed a high regard for the Spitfire. These British flown aircraft were our most dangerous opponents.

When the Russian Campaign started, we had the Me 109F, a highly capable aircraft which was easily able to deal with the challenge from the Soviet aircraft, many of which were obsolete but, as the war progressed, this situation changed. When my wing was re-equipped with the Focke-Wulf

Fw 190A-9 fighter, I was very impressed with its extra firepower, but I still loved the Me 109, flying the G version to the end of the war.