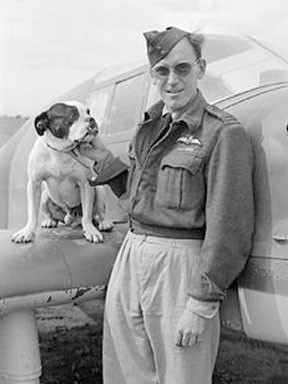 I made up my mind to join the RAF if war threatened, so after the Munich Debacle in October 1938, I applied and was accepted into the RAFVR. I started training in early 1939 on Miles Hawks, Tiger Moths, and Masters, later converting to Spitfires. At Hawarden I experienced my first crash – amid-air collision with an Anson coming in to land, but luckily escaped without serious injury.

The next day I joined my operational squadron 611 (County of Lancaster), where the C.O. warned me that breaking Spitfires was not a pastime he liked! I remained with 611 for nearly a year flying Spitfire Mk I’s and it was in this aircraft that I intercepted and damaged my first Ju 88 off Skegness one afternoon. I remember thinking how pretty the rear gunner’s tracer looked, whizzing past my cockpit – the deadliness of it all not registering till after I had gone to bed.

In November 1940, we moved to Rochford – Hornchurch Sector – to counter daylight attacks by German Mel09’s upon airfields in the South East. I flew as a squadron pilot throughout 1941 when we provided fighter escort to bombing missions and in August was appointed a flight commander in 603 Squadron. I had now flown over 150 offensive operations, mostly at high altitude, and been in action against Me 109’s continuously throughout. During this period I destroyed eight enemy aircraft, probably destroyed five, damaging a further ten and awarded the DFC and Bar. Flying as many as four sorties a day over 30,000ft had taken its effect – on landing back at base one morning I passed out and was rushed to hospital with double pneumonia. After sick leave, 11 Group posted me to Southend as Station Adjutant – this was a greater shock than going into hospital!

I was soon itching to get back to operations and was relieved when Harry Broadhurst, Hornchurch’s Station Commander, got me command of 64 Squadron. An important operational commitment now included supporting the Hurricane Bombers in flak-busting and anti-shipping operations.

In August 1942 my Squadron took part in the combined operation against Dieppe. We flew 4 squadron sorties and destroyed five enemy aircraft for the loss of two pilots and three aircraft. I shot down two Dornier 217’s and got shot down myself in the process. Surviving that, I was delighted to learn the next day that I had been awarded the DSO and appointed to take command of the North Weald Wing. During this period I destroyed 6 enemy aircraft, probably destroying 2 more and damaged 3.

No 64 Squadrons was my first command and as such had great significance to me personally. It was one of the first Squadrons to be equipped with the Spitfire Mk I, and later during my command, was the Squadron chosen to receive the first Mk IX Spitfires in 1942. The pilots, crew, and staff on 64 Squadron were a splendid team, great friends, and second to none.

In December 1942 I was posted to HQ Fighter Command as Wing Commander, Tactics, but in May I was sent to Malta.

Assuming command of the Cuqa Spitfire Wing, we took part in the Allied landings in Sicily, and later posted to Desert Air Force as Wing Leader of 244 Wing, in support of the 8th Army. On the 2nd September, I baled out because of mechanical failure and spent 6 hours in my Mae West off the toe of Italy.

By November 1943, as a Group Captain, I was commanding 324 Wing, based at Naples, supporting the American 5th Army in their advance towards Florence including the assault on Cassino and the landings at Anzio. Our forward airfield at Anzio came under artillery fire, however in August we moved to Corsica, supporting the V.S. 7th Army’s invasion of the South of France. In the ground attack role we strafed radar stations, German transports and lorried infantry. By the end of September 1944 my Spitfire Wing was recalled to Italy and converted to the fighter-bomber role in support of the 8th Army in its difficult operations crossing the Po Valley. I ended my war commanding No 1 Base Area (Naples) before returning to England in August 1945. During my fourth operational tour I destroyed a further 5 enemy aircraft and damaged 2. In March 1945 I was awarded a Bar to my DSO. In 1952 following an operational tour on Spitfires and Vampires in Malaya I was awarded a second Bar to my DFC.

I have flown 11 different Marks of Spitfire operationally from the Mk I to the Mk XXII. Of these I flew Mk’s I, 11, Va, Vb, VIII, IX and XVIII in Combat. My favourite remains the Mk IX/VIII. It was an aircraft with superb handling qualities, enough power to take you to altitude rapidly, it had a top level speed in excess of 400 mph, and a combat performance of climb, rate of turn and acceleration, better than any enemy aircraft I ever fought against. 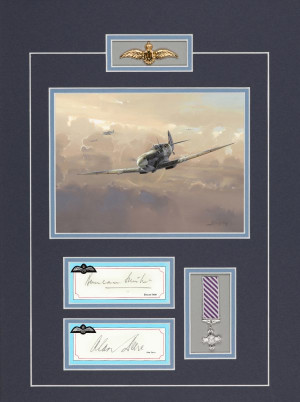