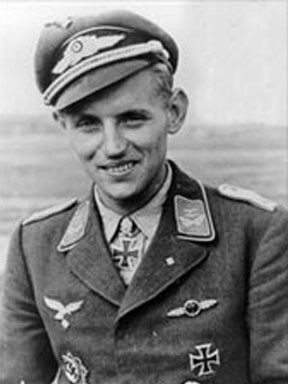 The words of Erich Hartmann.

I was born in Weissach, Wurtemburg on 19 April 1922, the son of a doctor. My mother was a keen aviation enthusiast and taught me to fly gliders when I was only 14. I joined the Luftwaffe in October 1940 and began my flying training at Berlin Gatow on 5 March 1941. After advanced flying and fighter pilot training, I was posted to Operational Training Unit East in March 1942, in the rank of Leutnant. Then, on 10 October 1942, I reported to JG 52 at Soldatskaya, north of the Caucasus mountains, where I joined the 7th Squadron. My first sortie resulted in an emergency landing and it was not until 5 November that I achieved my first victory, again being forced to emergency land my aircraft. My first 100 missions brought me only 7 victories.

My first really successful month came in July 1943, during the fighting in the Orel-Kursk region, when I achieved 24 victories and was entrusted with the leadership of 7JJG 52. In August, I managed another 49, including seven on the 7th, often flying up to four sorties a day. On 20 August, after shooting down two Il-2s, I was forced to make another emergency landing, this time behind Russian lines, and was taken prisoner. Whilst being transported eastwards, I was fortunately able to make my escape and returned to our own lines two days later.

I rejoined my Wing at L’vov, in Poland, on 18 March and, the following month, we moved to Romania to protect the oilfields. Shortly afterwards, we were ordered back to the Crimea to help counter a Russian offensive. We were forced to hastily depart from this region on 8 May 1944, myself flying out with two mechanics in the fuselage of my Me 109. By 2 July 1944, my score had reached 286, for which I was awarded the Swords and, on 23 August, I passed the 300 mark. I was the first pilot to do so, for which I was awarded the Diamonds the following day, and ordered by Galland to transfer for training on the Me 262. After persistent requests, however, I was able to return to JG 52 on 1 October 1944, this time to command the 4th Squadron.

In February 1945, I temporarily led I./JG 53 until, the following month, I became Gruppen Kommandeur I./JG 52. On 17 April 1945, I reached the 350 victory mark and on 8 May, scored my last victory over a Yak 11. Hours later, the war was over and my Gruppe surrendered to the Americans in Pisek, in Poland. In my two and a half years of operations, I had flown over 1400 missions, 825 of which involved aerial combat, and had scored 352 victories.

On 24 May 1945, we were handed over to the Russians and I spent the next ten years in Russian captivity, returning to Germany on 15 October 1955. Four years later, I joined the new German Air Force, where I became Kommodore of the first of the new fighter wings, JG 71 “Richthofen”.

I spent almost my entire wartime career in JG 52 and formed many deep friendships there as a result. My first responsibility was as wingman to Eduard “Paule” Rossman, a senior NCO who was a steady, reassuring teacher. Due to his injured arm, he could not dogfight like many of the others, so he specialised in surprise attacks. Much of my later success was due to his example. I also formed a close bond with my crew chief, Heinz Mertens, whose loyalty to me was such that when I went missing behind Russian lines, he took a rifle and entered Russian held territory in an effort to find me. Also, men like Gerd Barkhorn and Walter Krupinski were an inspiration to me in terms of leadership and camaraderie and became lifelong friends.

In my two and a half years of combat, I only flew the Me 109 on operations. My first experience of this fighter was in 1941 at the Fighter Pilots’ School at Zerbst, where I learned to fly the Me 109E-4. It was a superbly handling machine. However, almost all of my combat flying was in the Me 109G in all its various sub-variants. Perhaps the most widely publicised of my aircraft was my Me 109G-14 with its “Galland” canopy and the black tulip design painted on its nose. However, I only flew with such distinctive markings for a short period, since I found that Russian aircraft were deliberately avoiding me. However, as well as a fine fighter aircraft, the Me 109 was a strong workhorse, a quality which came in particularly useful during our hasty evacuation from the Crimea. With the radio and armour removed, we could put four men in the fuselage without any problem getting off the ground, even with two 30 mm cannon under the wings. If more space were available in the fuselage, I believe we could have carried five or six extra men in an emergency. 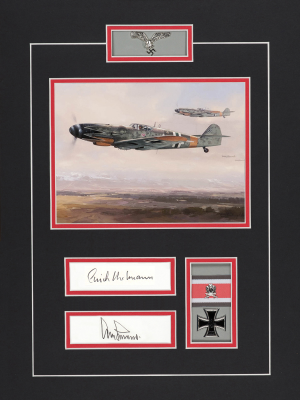 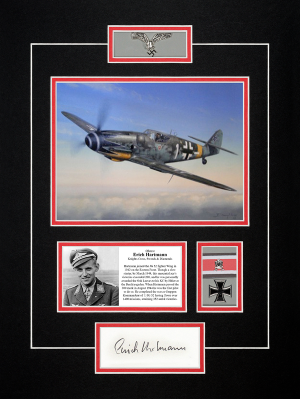 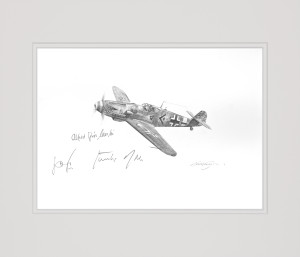