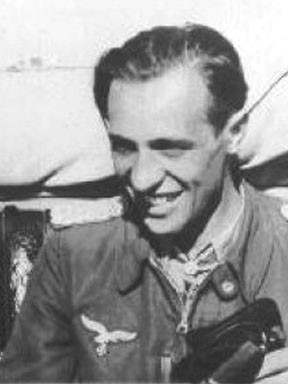 Having initiated my training as a commercial pilot, I was conscripted into the Luftwaffe in 1938 to fly fighters. This training included flying the Fw 44 “Stieglitz”, Heinkel “Kadett”, Bucker “Jungmann” and “Jungmeister” and the Ju 52. By the beginning of 1939, I was flying the twin-engined Me 110 operationally and then returned to the Fighter Pilots’ School at Munich-Schleissheim for single-seat fighter training, which included the Me 109.

In November 1939, I joined I./JG 2 “Richthofen” as an officer cadet sergeant, happy to be a fighter pilot since, confident of my own ability, I felt that it gave me the best chance of surviving the war. I certainly didn’t want to drop bombs.

From January 1940, I was flying frequent French border patrols in the Me 109E, but never saw an enemy aircraft. Then, on 14 May, we received orders to protect the Maas bridges, near Sedan, from low-flying attacks from French aircraft. Taking off from Dockendorf Airfield, we flew to the bridges, crossing them at about 1,000 feet when we saw three Curtiss aircraft. Setting myself behind the first one, which was climbing from its attack, I opened fire and it fell burning into a field. At around 21.05 hrs, we landed at Bastogne after nearly two hours flying and I had scored my first aerial victory.

When the war in France ended, I had achieved nine aerial victories, was a four-aircraft Schwarm Leader and had been promoted. My I. Gruppe then moved to Beaumont le Roger for operations against England for the Battle of Britain. For the early part of this campaign, I flew the Me 109E, but when I became Adjutant of II./JG 2 in June 1941, having been promoted to Leutnant the previous November, I switched to the Me 109F. Transfer to command 6 Squadron followed in August, with further promotion in October. At this time we were flying from Abbeville-Drucat airfield. By the end of 1941, I had achieved 21 aerial victories, all over fighters, and was a holder of the coveted Knight’s Cross.

In April 1942, I re-equipped with the Fw 190 at Paris-le-Bourget and then, in December, II./JG 2 was transferred to Tunisia. We were later transferred to North Africa where I succeeded our commander, who fell in action.

In March 1943, we returned to Beaumont le Roger and, now in the rank of Hauptmann, I converted to the Me 109G. In July, I was transferred to command II./JG 54 in Russia, having scored 75 victories in the West. In the East, I only flew the Fw 190 and added another 137 to this score, for which I received the Oak Leaves on 1 April 1944 and, to coincide with a transfer back to the ‘Defence of the Reich’, the Swords, in January 1945. The following month, I took command of I./JG 7, this time flying the Me 262.

jet from Kaltenkirchen. I ended the war in the rank of Major, with the non-operational IV./JG 7 at Schleswig-Jagel, having achieved 224 aerial victories, the final 12 of which were in the Me 262.

My experiences with JG 54 are probably closest to my heart, and it was with this wing that I achieved my greatest successes. My Gruppe was excellent, with experienced leaders and no arrogance of any kind. The Russian aircraft we flew against weren’t bad, but their pilots lacked experience, so the fighting wasn’t as tough as in the West.

I flew the Me 109E on operations until 1941. I enjoyed flying this fighter aircraft although I found it to be less manouverable than the Hurricane and Spitfire, and therefore was at a disadvantage in a tightly turning combat.

The Me 109F-2 had a more powerful engine, was more streamlined and more manouverable than the E model, was very nice to fly, and had excellent high altitude performance, which made it particularly suitable for operations against the RAF. I once flew over Southampton on the south coast of Britain at 40,000 ft.

When I converted to the Fw 190, the air war had shifted to altitudes of around 20,000 ft, due to the increased influx of bombers and, at these heights, the Fw 190 flew very well. I flew this aircraft in Africa and on the Eastern Front and, for me, it was a wonderful fighter. It could turn ‘on a plate’, the wings being white from condensation and to pull it out of a dive at 440 mph was no problem. The Me 109 wasn’t strong enough to do that. Against the British, our aircraft were so well matched that it all came down to the skill of the pilot. 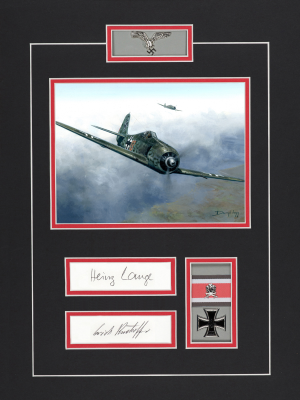 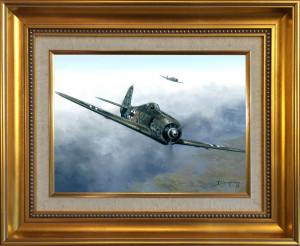