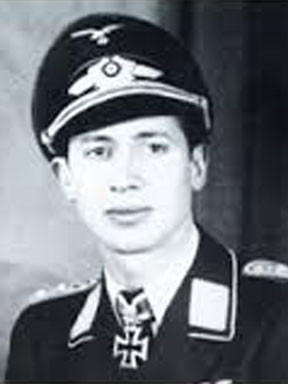 I was born on 2 February 1919 in Cologne, Germany and, by the time I had joined the Luftwaffe in April 1939, I had undergone pilot training on both glider and powered aircraft. After basic military training, I received my B2 and Grade 1 blind flying qualification, then in April 1940, I was transferred to Fighter Pilots’ School No 2 at Magdeburg South. Our primary training aircraft was the Arado 58, after which, in preparation for the Me 109, we flew the four-seater Me 108.

In November 1940, I was posted to the training replacement Gruppe of JG 77, based in Bordeaux. Here, I met my future Squadron Leader, Heinrich Setz for the first time; he was to leave a deep impression on me. We flew patrols along the west coast of France until, in early 1941, we were transferred to Austria.

In June 1941, operating from many different airfields in Romania, we flew operations in support of the Russian Campaign, generally as escorts for our bombers and Stukas, We also attacked Russian troop concentrations, and flew “free-hunt” missions. I finally shot down my first aircraft on 8 August 1941 and, by the end of the year, I had shot down 24.

At the beginning of 1942, we briefly left the Front for the Vienna area to convert to the Me 109F and then returned for operations in the Southern and Central Sector. My personal success was acknowledged on 1 July with the award of the Knight’s Cross after 53 victories. In the short period afterwards, I achieved another 29 victories until, on the 23rd, I was wounded and hospitalised. Returning to the Front in September 1942, I shot down another 16 aircraft and passed the 100 victory mark, for which I was awarded the Oak Leaves to the Knight’s Cross.

In December 1942, the 2nd Gruppe of JG 77, in which I flew in the 4th Squadron, was removed from Russia and transferred to Tripolitania, North Africa. We later withdrew to Tunisia. After the Russian Front the contrast was like that between night and day. I had my most successful period in Africa and as a consequence, I was promoted to Leutnant in April 1943. In four months, I achieved 51 aerial victories, of which 47 were fighter aircraft These made me the most successful fighter pilot in North Africa during that period.

In May 1943, we left the Cap-bon Peninsula of Tunisia and transferred, first of all to Trapani, Sicily, and later to southern Italy, from where we were pushed ever more quickly northwards.

Gruppe of JG 77 is still very dear to me. I flew operations with this Wing in France, Romania, Russia, North Africa, Sicily and Italy and served under some leaders I will never forget. When 2 Gruppe was part of the huge transfer to North Africa, our Squadron Leader, Heinrich Setz, became Gruppen Kommandeur I./JG 27 in France but sadly was killed in March 1943. In January 1943, Major Joachim Muncheberg arrived as Kommodore and our time in Tripolitania and Tunisia became characterised by leadership of a kind we had never seen before and a spirit of comradeship never subsequently surpassed.

On 13 August 1943, I was forced to make an emergency landing in the sea and was barely able to save myself from drowning. On 1 December 1943, I took over the leadership of the 1st Squadron of LUG 77. On 3 April 1944, I was transferred to IV./JG 27, where I initially took over the 12th Squadron and, later, the 14th Squadron, for which I had to complete a Squadron Leader’s Course. On 2 January 1945, I was given the leadership of IV. Gruppe JG 27, and was promoted to Hauptmann. In February, after 174 aerial victories, I was awarded the Swords to the Knight’s Cross. Our main task was the ‘Defence of the Reich’, during which, in March, my Gruppe was disbanded and I was transferred to III./JG 7 for training on the Me 262. After 715 combat missions and 174 aerial victories, of which 73 were in the West, I entered American captivity in Bavaria on 5 May 1945.

For the main part of the war, I flew the Me 109 in its various forms until, very near the end, I converted to the Me 262. My combat career began flying the Me 109E, which was a fine fighter aircraft. In early 1942, my II./JG 77 was converted to the Me109F. The F variant was the best version we ever had. The later G version, with all its modifications producing a bulge here and a bump there, was never quite the same thoroughbred. Although the engine had more power, it was also heavier and therefore, to accommodate this, the fuselage, engine mounts and landing gear had to be strengthened, substantially raising overall weight The result was increased speed, but inferior manoeuvrability. I never flew the Me 262 operationally.