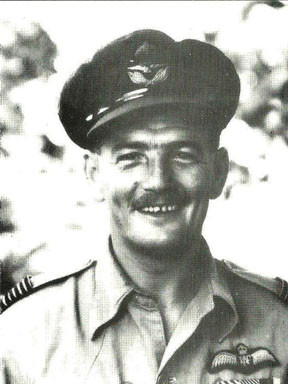 1930 found me leaving the RAF Halton Apprentice School with three years training under my belt to join, as a fully blown mechanic, No. 43 Squadron at Tangmere, one of the happiest and renowned of Squadrons. When in 1936 I rejoined ‘43’, after an absence of two years, as a Sergeant Pilot just out of training at 6 F.T.S. Netheravon, my world was complete. We flew Hawker Fury aircraft, a pure delight in themselves, and when we re-equipped with Hurricanes in late 1938 we were ready for anything.

I gained early combat experience at the beginning of 1940 in the shooting down of three individual Heinkel 111’s in the act of bombing shipping in the North Sea. On April 1st, 1940 I was commissioned and posted to No. 3 Squadron, Kenley which almost immediately was packed off to Merville.

In early May 1940 the air over Northern France and Belgium fairly teemed with German aircraft, mostly without fighter escort. With this background my luckiest sortie began promisingly enough when I saw a Heinkel III with one engine feathered. A short burst at the working elastic soon abruptly terminated its flight. Minutes later a great gaggle of some 60 odd JU 87 Stukas hove into view. The Stuka had the rather obliging characteristic of bursting into flames almost as soon as one opened fire. Two of these performed predictably and hit the ground and two others were following suit on their way down when I saw a beautiful bright silver DO 17 float across my bows. Giving it the remainder of my ammunition in one long burst, it slewed violently with much smoke pouring out, but being very short of fuel I turned hurriedly for base. The conspicuous DO 17 was confirmed by a fellow pilot who saw it crash.

On May 14th, 1940, after an intense period of fighting with plenty of good fortune, I was shot down, slightly wounded in the leg, near Wavre, to be snatched from under the very nose of the Germans by an enterprising Belgian Army reconnaissance patrol. About a month later in company with three other slightly shop-soiled RAF pilots near St. Nazaire we came across a forlorn Bristol Bombay absolutely asking to be brought back to UK.

Once more my luck held and I was able to rejoin 43 Squadron at Tangmere, and was promoted Flight Lieutenant just before the Battle of Britain began. On 18th August 1940 after some eight weeks of anything up to six sorties a day, I was shot down again, slightly wounded in the leg to regain that now familiar limp.

For the next twelve months I was mainly engaged in training young pilots either ‘on the job’ in 43 or 245 Squadrons or at 52 O.T.U. Debden. Over a period of ten years I had the unique experience of having served in A Flight, 43 Squadron, as A.C.I., LAC, Sergeant Pilot, Pilot Officer and finally commanded it as a Flight Lieutenant, so my strong feelings for the Squadron can perhaps be understood and excused.

43 Squadron had an excellent record of past achievements right from its birth in Stirling in 1916 and always maintained the highest flying standards. All ranks found it a most happy Squadron which also had the good fortune to be based, between the wars, in a really beautiful part of the Sussex countryside.

In August 1941 I was promoted Squadron Leader to form No. 135 Squadron which was ordered overseas in December 1941, travelling via Takoradi, Cairo, Basra, Karachi and Calcutta to finish up landing in Rangoon on 19th January 1942 – in the middle of an air raid!

In February I was promoted to Wing Commander to lead a Wing which could seldom muster more than six serviceable Hurricanes and once took part in what we chose to call a “fighter sweep” with just one other aircraft.

Rangoon was evacuated in early March and, despite giving the Jap a good crack or two, the end was inevitable. March 19th saw me flying an old Tiger Moth to Akyab and a Vickers Valencia on to Calcutta to plead for more aircraft, but I was already sick with malaria on arrival. Before I left hospital, the Wing at Magwe in Central Burma had been heavily attacked, completely grounded, leaving the remnants to plod the hard way up to China via the Burma road.

Later in 1942 a newly reorganised Wing went forward to Chittagong and the Burma border, but before many months had passed I was posted away from fulltime operations to a series of less hazardous jobs in India, Middle East, and finally reached UK at the end of the war.

Almost without exception my entire operational flying was undertaken in Hurricanes. Although other aircraft may have attracted more glamour and boasted higher speeds, the Hurricane ploughed into every task that it was given and still came back for more.

Built like the Forth Bridge, it could take enormous punishment and almost always get you home. On one occasion in the Battle of Britain, I had my entire rudder and all but a tiny portion of one elevator blown off together with a hole in the port wing a man could have fallen through. Although its unusual silhouette attracted some local A.A. in the circuit, the Hurricane landed quite normally even though it needed a long rest. 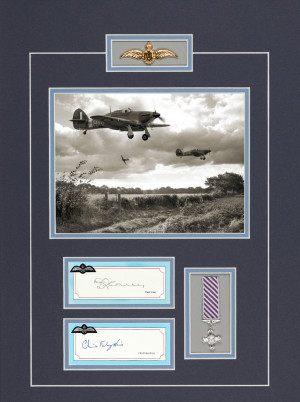 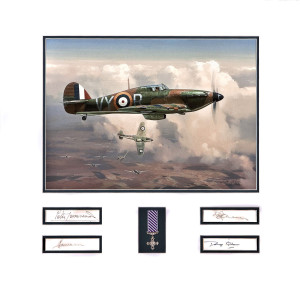