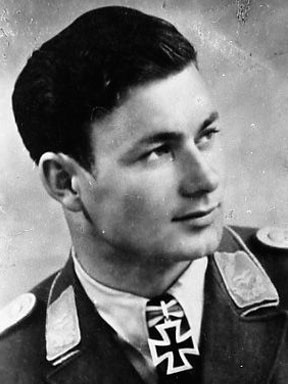 I decided to become a pilot in 1931 at 8 years of age, when a Junkers F-13 postal aircraft made an emergency landing in a meadow near my home. With my father in charge of its security, I was given a guided tour of the aircraft by the pilot, which left me smitten. From that day onwards, aircraft and flying have dominated my life. Despite only a mediocre performance at school, my application to become an officer pilot in the Luftwaffe was accepted and I enrolled on 1 October 1940, with Germany in its second year of war. I began the pilot training I had longed for in early 1941 at the Air Warfare School at Breslau.

Flying caused me no difficulty whatsoever and when I carried out an emergency landing in a meadow in Poland, my confidence soared. However, reaching my goal of becoming a fighter pilot was not helped by my personnel department who wanted me to train for long range reconnaissance; I fought to avoid this with everything I had, eventually with success. My fighter pilot training exceeded all expectations. We flew all the relevant Luftwaffe types, with a strong emphasis on tactics However, we young pilots were all keen to get to the Front as quickly as possible, afraid there would be nothing left for us.

On 3 January 1943, after a crazy, adventurous flight to the Front, I reported to Major Hrabak, Kommodore of JG 52, for duty. Our operational area, the Caucasus, was stormy, with 1 metre of snow on the ground and the thermometer reading minus forty. Reporting to 8. Squadron, under Hauptmann Rall, I felt quite naked surrounded by so many highly decorated pilots. That would have to change.

It was not always an advantage to be with such a successful wing as, at that time, with the defeat of Stalingrad, we were on the retreat. After only three unsuccessful sorties, all with frozen cannons, the order came to transfer home to re-equip, with me, the youngster, having to lead the vehicle convoy over the 2,000km journey – some pilot’s life!

After a short stay in hospital due to jaundice, I was reunited with 8. Squadron in March 1943 and quickly scored my first aerial victory. However, on 28 May, after a healthy bout of “beginners luck” had brought me 25 victories, I got hit by cannon fire, in a massive aerial battle, which tore open my right hip. In spite of this, I was just able to land my stricken Me 109 before being taken off to hospital. I had only a few weeks previously taken over the leadership of 8. Squadron.

After my 120th victory, my combat career effectively ended on 30 December 1944 when an explosive charge tore my left had to pieces. By the time the meagre bits remaining were packed into plaster and made useable, it was March 1945. I did, however, manage to acquire a new Me 109K-10, but a massive attack by P-47s totally destroyed it and I was unable to rejoin my Squadron for the rest of the war. I spent my entire combat career in 8. Squadron JG 52. As a fighter pilot under training, names like Molders, Galland, Hrabak and Rall were on everyone’s lips, so imagine my feelings when I was posted to this already very successful wing and discovered that my Squadron Commander was Hauptmann Rall. Later, when Rall took over command of III. Gruppe and I, having just turned 20, was given the leadership of the “Royal 8.” Squadron, he always kept a watchful eye on how I was doing.

In JG 52, our operational area was the Southern Sector, which was nearly always the hottest point of the battle. This is definitely why the pilots of this wing achieved such high scores, although we also had more casualties to show for it.

The standard aircraft we flew on the Eastern Front was the Me 109F and the Me 109G-2 to G-6, receiving each new model without any special conversion training. The performance of the Me 109 was sufficient for aerial combat with the Russian fighters until about mid-1944, after which they met us on even terms. Our standard weaponry was 1 x 20mm cannon and 2 x 13mm machine guns, sometimes with 2 x 20mm cannons in pods under the wings. These were very effective against larger targets but impaired manoeuvrability and rate of climb. From late 1943, we had a new 30mm engine mounted cannon, with a 50 round drum which, although very powerful, was not ideal for fighter versus fighter combat, since the trajectory of the rounds was not straight enough.

My dream aircraft was the FW 190D-9/D-13 which I was able to fly towards the end of the war, but I never flew in combat.