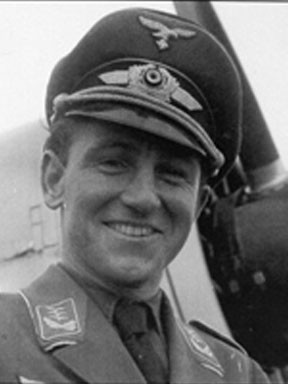 Born on 17 November 1913 I received my schooling in Berlin. Right from the beginning, I wanted to become a pilot, often busying myself constructing model aeroplanes. In 1930, three years before graduating from school, I began glider training in a Berlin Aero-Club as a means towards becoming a pilot. In April 1934 I joined the German State Police as a young Officer Cadet, the academy later being taken over by the Air Force. My pilot training began in 1936 and I was promoted to Leutnant. Following qualification as a pilot, I was posted to the Reconnaissance School at Tutlow, then, on 15 October 1936, transferred to JG 132 “Richthofen” where I learnt elementary fighter tactics.

On 15 March 1938, I was posted to Spain, to the 3rd Squadron of Fighter Unit 88, 3./JG 88, under Oberleutnant Galland, flying the He 51 ground attack biplane. Galland was later replaced by Molders who, leading the second flight on 31 May 1938, witnessed my aircraft being hit by anti-aircraft fire near Villar.

I bailed out at very low level and landed in no-man’s land, the remainder of my comrades flying repeated missions close by to deter the enemy from approaching me. However, I was taken prisoner, an unpleasant experience as we were considered to be mercenaries. I was lucky to escape death.

I managed to escape in February 1939 and finally returned to Germany via France. On 23 September 1939, after a short break, I was given command of 2./JG 26 “Schlageter” in Cologne. In May 1940, we moved to the Channel Coast at Audembert, near Wissant, from where we flew operations against England during the Battle of Britain, often up to 5 missions per day. During this period, I received my 100 missions golden clasp and Iron Cross 1st and 2nd Class. I remained with my 2nd Squadron until 17 May 1941, with promotion to Hauptmannon in March, after which I was sent to Japan as a diplomatic courier. However, when Germany attacked Russia this meant I was unable to return home, so I became attached to the Japanese Army Air Force. Here I flew fighter tactic missions on the Mitsubishi 96 and also trained Japanese pilots on one of three Me 109s they had at the time.

After an eventful sea journey in a blockade breaker, I arrived back in Berlin on 16 January 1942 and was immediately attached to the Staff of “General of the Fighter Arm” for the Channel Breakthrough of the German Fleet.

After a short spell of operations in Norway, leading a specially formed unit tasked with the protection of the battleship “Scharnhorst”, in March 1942 I was ordered to form IV./JG 1 (later I./JG 1), a new fighter Gruppe in Berlin. I led this Gruppe in the West as Kommandeur until 31 May 1943 where our tasks included attempts to intercept British Mosquitoes and combat missions against American bombers – these included the B-17 “Fortress”, which often had a powerful fighter escort. On 1 March 1943, I was promoted to Major. I then spent the short period 1 to 23 June 1943 as Gruppenkommandeur I./JG 26 in the East, before the unit was transferred back to France.

On 24 June 1943, I took over as Gruppenkommandeur III./JG 51 “Molders” on the Central Eastern Front. The Battle of Kursk soon developed into the Battle of Orel which had started on 5 July 1943 and a month later, on 5 August, it fell to the Russians. During this period, we were involved in very heavy fighting with a constantly strengthening enemy, and we were often not able to replace our losses. In November, I was awarded the German Cross in Gold and, on 1 April 1944, I took over as Kommodore JG 51 “Molders”.

JG 51 “Molders” has a place closest to my heart. The title “Molders” was adopted on 24 November 1941, after the death of its Kommodore, Werner Molders. I was JG 51’s Gruppenkommandeur for nine months, and Kommodore for much of the last year of the war. The Wing fought in the West until June 1941, when it supported the invasion of Russia. During 1942, much of the Wing converted to the FW 190 and in the summer of 1944, three squadrons were withdrawn for the “Defence of the Reich”, the remainder of the Wing gradually retreating to East Prussia. In April 1945, Gruppe was disbanded and many of its personnel became prisoners of the Russians. Many famous pilots, including Anton Hafner (204 victories), Joachim Brendl (189), Gunther Josten (178), Gunther Schack (175) and Werner Molders (115) flew in JG 51, which claimed a total of approximately 9,000 victories.

I remained in this command, with my Fighter Wing constantly moving westward, until 31 March 1945, when I received orders to transfer to Czechoslovakia to take over as Kommodore JG 77. On 28 April 1945, I was awarded the Knight’s Cross. A hectic period of operations in Czechoslovakia followed, where I was ordered to form a special unit from all available aircraft of all types, for ground attack operations. I was also frequently a Gefectsverband Leader, a special formation designed to intercept a bomber force with fighter protection.

On 8 May 1945, I gave the order to fly westwards and we entered American captivity in Regensburg. I had flown 750 missions in East and West, and scored 68 aerial victories, of which 11 were in the West.

For my combat career, I flew the Me 109E, F and “Gustav” and the Fw 190A and D variants. The Me 109E and F were both outstanding fighters, but with the additional weight incurred by the “Gustav”, it became increasingly less competitive compared with Allied aircraft. The air-cooled Fw 190A was rugged, heavily armed and much better suited for ground attack, intercepting bombers and operating from makeshift airfields. However, if combat occurred at altitudes above 20,000 feet (rare in the East), you were better off in the Me 109. The water-cooled Jumo-engined Fw 190D, however, was superb at altitude, the equal of any Western fighter. Unfortunately, they came in too few numbers and too late to have any significant effect on the air fighting. 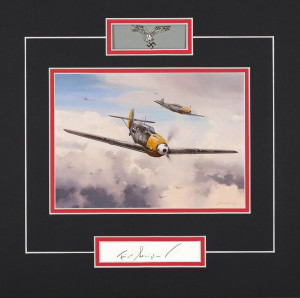