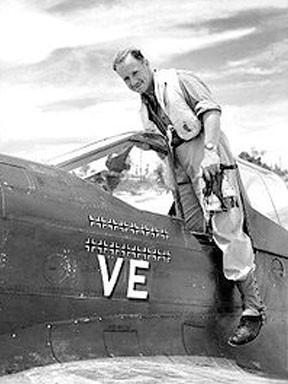 I joined the Royal Australian Air Force in 1940, and after training in Rhodesia with many other young men from the Empire, I was posted to the Middle East in the following year where i took part in the great air-ground battles then raging over the Western Desert.

250 (Sudan) Squadron was my first operational unit and commanded by Squadron Leader E. J. Morris, DSO, from South Africa. He was a very brave and fearless leader who gave every encouragement to all his pilots, both in the air and on the ground, and he commanded the unquestioned loyalty and respect of the whole squadron. Thus, I learned my skills in the company of fighter pilots from all parts of the Empire – Australia, Canada, South Africa and New Zealand.

During my 16 months in the Desert Airforce I served with several squadrons and flew Hurricanes, Tomahawks, Kittyhawks and Spitfires. During this time I destroyed 15 enemy aeroplanes and shared in the destruction of another, but in June 1942 I had a very close call.

In May 1942 I was posted as pilot to 260 Squadron flying Kittyhawks, and with ten victories at this time was a confident and experienced fighter pilot. The Eighth Army were retreating from El Agheila to El Alamein; the enormous tank battle at Knightsbridge had been fought and lost and we were dive bombing and strafing Rommel’s advancing columns.

On 12th May that year, eight of our long-range Kittyhawks escorted five Beaufighters to try and intercept Ju 52’s carrying reinforcements and supplies to Rommel, operating between Crete and Derna. Soon after reaching our patrol line I saw a gaggle of Ju 52’s approaching head-on. I led the squadron in a complete circuit of the enemy (3 engined transports on this occasion carrying troops), but without seeing any fighter escort. Then followed a furious few minutes in which I destroyed two Ju 52’s and two Me 110’s and was myself hit by return fire. When I left the fight only three enemy aircraft were still flying and I counted nine aircraft burning on the sea below.

That same month I was leading my section of four Kittyhawks back to base at 3,000 feet when suddenly, without warning, I saw my wingman, about 100 yards away, going down in flames with two Messerschmitt 109’s on his tail. I swung in behind the last 109, opened fire and hit him, but after a few rounds all six machine guns jammed and I, the hunter, soon became the quarry.

On my left, a few miles away was the Mediterranean. Not far inland were three escarpments about 150 feet high, running roughly parallel to the shore. I was flying about twenty feet above the ground with my right hand wing tucked in as far as safety permitted to the escarpment, with the leading 109 about 100 yards behind me. His wingman was about the same distance away, on top of the escarpment. Thus, the wingman could not get at me and the leader had to be very careful of my slipstream. Under the circumstances I thought I was in the safest possible position, but a continuous series of bangs and thumps made me very much aware that I was being shot at and hit.

Suddenly the escarpment flattened out and there was I at low level, no guns, two Messerschmitts on my tail and nothing but flat ground ahead. Strangely, I was not afraid, just bloody angry, and I broke to the left in a steep climb, turning, which seemed to take both 109’s by surprise. Having gained a valuable few yards I then dived back to the deck with the 109’s following right behind to my airfield, and as I crossed it at about ten feet, they fired their last bursts.

The C.O. was just getting out of his Kitty hawk when he saw me coming and a line of bullets throwing up the dust across the landing strip and coming in his direction, and I can see him now diving face first into the thick dust.

On landing, I was inspecting my Kitty, which was scarred by more than 120 bullet holes, when the C.O. sent for me and gave me a good dressing down for bringing the Messerschmitts back to our airfield. But he never explained where I should have led them!

After the great victory at El Alamein, which saw the turning of the tide, I returned to Australia. In 1944/45 I was back in action in the Far East, commanding 80 Squadron RAAF where we operated Kittyhawks. 80 Squadron undertook dive-bombing and strafing missions against Japanese targets and we carried out many attack operations in New Guinea and Borneo during this period.

I flew the Hurricane I, IIc, Tomahawk, Kittyhawk and Spitfire in combat in WWII. Though I got my air victories in the Tommahawk and Kittyhawk, my favourite fighter was the Spitfire. After flying Tomahawks and Kittyhawks it was a great thrill to fly such a nimble fighter and one that performed so well at altitude. To see enemy aeroplanes below us for the first time was a big change for me. The Spitfire was steady, magnificent and manoeuvrable, and was such a delight to fly. Later on I flew most American fighters, and also a captured Me 109, but I am convinced that there was never a sweeter aircraft to fly than the Spitfire. 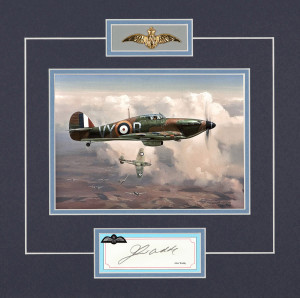