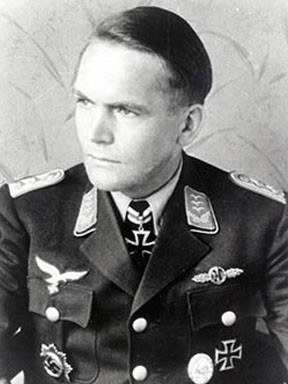 I was born on 11 January 1917 in Munster, Westfalia. I was an enthusiastic glider pilot and, as soon as I was able, joined the Luftwaffe as an Officer Cadet. I was promoted to Leutnant on 27 August 1939. On 11 December 1939, I joined the newly established 4UG 2 “Richthofen” equipped with the Me109. At the beginning of the French Campaign, in May 1940, we were transferred to Beaumont le Roger, where I flew as wingman to my Staffel Leader, Assi Hahn, until he received the Knight’s Cross after 20 victories.

I achieved my first aerial victory at mid-day on 19 May 1940, when I caught a Hurricane after a low level chase. My second came on 3 June 1940, a Curtiss P-36. On 11 September 1940 – a period of intense air fighting – after achieving my fifth aerial victory, I was awarded the Iron Cross First Class. My last two victories of 1940 came on 28 and 29 November when I led the 4th Staffel. My victory on the 29th was a Blenheim, the first bomber I had seen up until then.

On 15th April 1941, I took command of 3./JG 2. On 24 July, after shooting down three Blenheim bombers, I was badly wounded and did not return to the Front until 3 May 1942. On 1 August 1942, I took over 11./JG 2 and in November, we were transferred to North Africa. On 1 February 1943, after shooting down a Flying Fortress for my 32nd victory, I was shot down in flames and again wounded. For my convalescence, I joined the Staff of JG 53 in Neapel. On 20 April 1944, I was appointed Gruppenkommandeur II./JG 53 at Eschborn near Frankfurt for the “Defence of the Reich”. During the Invasion, we were transferred to France and, in the ensuing fighting, suffered many casualties.

We later moved to Southern Germany. On 24 October 1944, I was awarded the Knight’s Cross after 44 victories and, the following December, was promoted to Major. At the end of the war, I had achieved 53 victories in the West from approximately 600 missions.

Both JG 2 and JG 53 left a great impression on me. JG 2 was set up in Doberitz as the first fighter wing of the Luftwaffe and was used exclusively in the West throughout the war. At the end of 1939, I had the good fortune to arrive at the newly created 4th Staffel, at the time led by Assi Hahn. In April 1941, I took command of 3./JG 2 and in August 1942, I transferred to command 11./JG 2, which I took to North Africa. Flying with JG 2, I participated in combats in which three Kommodore fell – Hauptmann Balthasar, Major Wick and Major Oesau.

In 1943, I joined JG 53 “Ace of Spades” in Tunisia and there served under Oberst Gunther von Maltzahn, the best leader I ever had.

I flew every model of the BF 109 that was operational during the war. Throughout, it was constantly being modified and improved, with greater power, strength and armament. At first, we even had to turn the propeller by hand. In 1942, my Staffel, 11UG 2 and I flew the G1, the model conceived as a high altitude fighter, with removed armour plating and pressurised cabin. But we still had to wear oxygen masks. Flying this model. I once had a ‘duel’ with a Spitfire at about 35,000 feet. We constantly circled around each other rather than fought as neither could get ‘inside’ the other, and eventually parted without result.

Earlier in 1942, whilst in 3./JG 2, I flew the Fw 190 – a very modem aircraft which meant a reduced workload for the pilot. I think there was a total of 13 functions, including flaps, trim adjustment and start-up which were electrically controlled, whereas with the BF 109, all these were manually operated. However, in combat, I found them to be similar. In 1942, I took off in my BF 109 G1 and Egon Mayer took off in his Fw 190 and we had a mock combat. We tried everything, but neither could get the upper hand. We eventually gave up, exhausted, having decided one aircraft was as good as the other. However, when attacking bombers, the Fw 190 was infinitely superior, with the punishment its air-cooled engine could take. With the BF 109, it was easy to receive a hit to the engine cooling system which left you at the mercy of the escorting fighters. I once saw a pilot return an Fw 190 from England at below radar height with 2 cylinder heads destroyed and his cockpit covered in oil, an incredible feat and testimony to the robustness of the Fw 190.