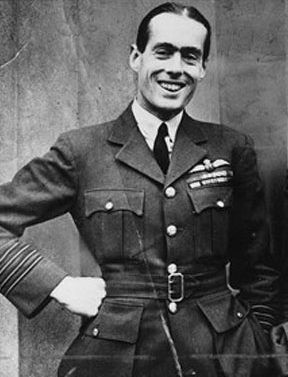 When Leonard Cheshire joined the University Air Squadron shortly after going up to Oxford in 1936, he little suspected how significant his flying experience would soon become. Nor could he ever have envisaged the sharpness of the contrast between his ‘jaunts’ over the OUAS base in Sussex in Hart Trainers and Avro Tutors, and wartime operations where his own, and his crew’s lives would be so much in jeopardy. He first flew solo on June 8th 1937 and was commissioned as a pilot officer in the RAF Volunteer Reserve on November 16th of that year.

It soon became evident that his days as a carefree undergraduate were numbered.

In October 1939 Leonard Cheshire reported to 9 FTS Hullavington to begin to learn his craft in earnest on Avro Ansons. He received his pilot’s wings that December and proceeded to 10 OTU, Abingdon for conversion training to Whitley bombers. Cheshire flew his first operational sortie from Driffield as second pilot in Whitley “Q – Queenie” against Abbeville and he recalls that it opened his eyes to the enormous responsibility that laid upon the shoulders of a pilot of an aircraft in war.

Soon to become a skipper he realised that men’s lives were to depend upon his skill as a pilot and he began to study the art of flying with a seriousness and depth that made an Oxford degree seem like the Eleven Plus!

His first major test as Captain came on the night of November 12/13th 1940, piloting the Whitley V P5005 “N-Nuts” on a raid in the Cologne area. The target was an oil refinery but on arrival they found it obscured by cloud. Cheshire decided to switch to the secondary target-the railway marshalling yards. He had just begun the first bombing run, when anti-­aircraft fire opened up in their path. There was a gigantic explosion which ripped a twelve-foot hole in the port side of the fuselage. One sliver of shrapnel had caused one of the photo flares to detonate. They managed to complete the bombing run and eventually limped home. “I learned that night yet another lesson: I was as dependent upon my crew’s skill, courage and dedication, as they were on mine. Flt. Sgt. Henry Davidson, the wireless operator, had taken the full force of the blast and his face was charred black, leaving him totally blind. His ordeal was made all the worse when another shell came through the cockpit, adding a roaring wind to his already considerable problems. It also temporarily stunned me and made me think we were going vertically down out of control. Despite the unspeakable agony Davison suffered he insisted on returning to his wireless set in order to try to maintain contact with base for the five-hour struggle to get home”.

Leonard Cheshire was awarded the DSO, and Davidson received the DFM.

y 1943 Cheshire had completed 60 operations over Germany and France and in July took over command of 617 Squadron. In 617 he ceased regular ‘ops’ – every one was a special op, and all geared towards the crucial task of destroying the V3s before they could begin firing on London (the V3s were protected beneath 50 feet of reinforced concrete!).

Having been assigned the task, with Mick Martin, of finding a means of marking a target with an error of not more than 10 yards… Cheshire and Martin knew that low level was the only means of achieving this and finally succeeded in proving their point. In November 1944 the war cabinet gave special permission for the new technique to be used against the Gnome-Rhone factory at Limoges, on condition that not a single civilian was killed. Cheshire did two runs over the target in his Lancaster at less than 50 feet and then 5 minutes later dropped his markers on the target. The rest of the Squadron was then called in one by one to drop their 10,000 lb bomb from a height of 16,000 ft. Not one of these bombs dropped outside the factory, and the door was opened for a new technique of high level precision bombing. Within two months Cheshire got the Mosquitos he wanted for himself and the three other low flying marking crews. Amongst the special targets attacked and destroyed were the E-boat pens at Le Havre, the Samur railway tunnel that linked the reserve Panzer Division in the South of France to the Normandy front, the ball-bearing factory at St. Etienne and other vital targets in France which otherwise could not have been attacked. When Barnes Wallis’s deep penetration tallboy bombs were ready the Squadron turned to the deadly V3s in their Pas de Calais sites and destroyed them before they were ever used.

In 1944 Leonard Cheshire was awarded the Victoria Cross for four and half years of sustained bravery during a total of 100 operations.

Cheshire’s final and possibly most momentous operational sortie was made as the official British observer when the atom bomb was dropped on Nagasaki on August 9th 1945.

In 1948 he founded the first Leonard Cheshire Home. Today the Foundation runs 75 homes in the U.K., and no less than 147 in 45 Countries throughout the World.

“I had much to be thankful for in the friendships I formed, the example I was set and the help I was given throughout my 4 years in Bomber Command. 102 Squadron in June 1940 gave me my apprenticeship and 617, in the 8 months leading up to D Day gave me the opportunity of putting into practice target marking techniques that I had long wanted to try. But the memory that will stay with me the longest is of my ground crews who so loyally and expertly kept my aircraft serviceable, often spending long hours in extreme cold to do so. I never once suffered an engine failure.”

“I flew Avro Ansons, Whitleys, Halifaxes, Lancasters, Mosquitos and two sorties in a Mustang. All these aircraft had their good points but none could compare with the Mosquito for her speed, handling and unique versatility. She was a beautiful lady, provided you respected her.” 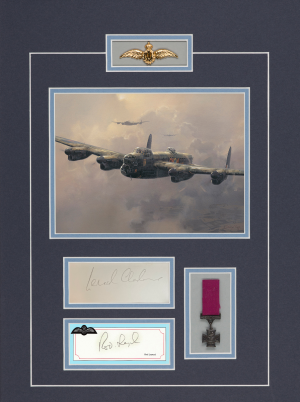 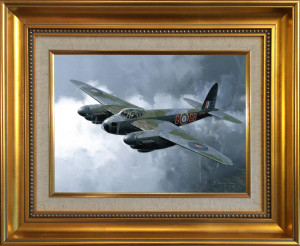