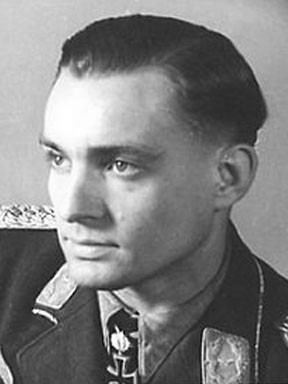 The words of Paul Zorner

I began my military training in the Luftwaffe on 7 November 1938. After recruit training, I attended the Air Warfare School at Berlin- Gatow and, on 31 October 1939 I received my Luftwaffe Pilot’s Licence. When I later obtained my instrument rating, I spent one year as a flying instructor before, on 25 March 1941, becoming an operational transport pilot.

I remained in this role until October 1941, having flown in North Africa, the Mediterranean and southern Russia. I then commenced night-fighter training. After a further 8 months, I joined II./NJG 2, based in Holland, for night operations, immediately having to re-train to fly the Ju 88.

My first enemy contact came on 28 July 1942, a Wellington bomber returning from a raid on Berlin. As I closed in to about 200m, he suddenly began to turn and, losing my nerve, I started shooting – much too early! With the bomber crew alerted, the aircraft then made a Split S manoeuvre and disappeared below into the haze. I never saw it again.

After two more operations, my squadron was re-equipped with the Dornier 217 and on 3 October, I was transferred to IV./NJG 3, based at Grove in Jutland. After a further six operations, I was transferred again, on 6 December, to take command of 2./NJG 3 at Wittmundhafen, operating the Do 217. I didn’t think much of this aircraft, so I went to great lengths to get a Messerschmitt 110, eventually succeeding. Flying this machine on only my 14th night mission, I finally shot down my first aircraft on 17 January 1943, a Halifax bomber returning from Berlin.

By the beginning of March 1943, I had achieved 5 victories, all with the Me 110. When I refused to fly any more operations in the Dornier 217, I was transferred to an Me 110 unit, 3JNJG 3, as Squadron Commander. I led this squadron until 10 September, during which time, flying from numerous different airfields in Holland and Belgium, I shot down another six aircraft. I then took over 8./NJG 3 in Luneburg, where I remained until 4 April 1944. During this period, I achieved 29 victories, a promotion to Hauptmann on 1 March and the award of the German Cross in Gold on 20 March.

On 5 April 1944, with a total of 41 victories, I took command of III./NJG 5, in Mainz-Finthen, later moving to Laon-Athies. On 9 June, I was awarded the Knight’s Cross after 48 victories, then in mid-August, the Gruppe was transferred to Lubeck-Blankensee and was re-equipped with the Ju 88. On 17 September 1944, after 58 victories, I received the Oak Leaves to the Knight’s Cross and, on 13 October 1944, I was transferred to the Vienna area to become Kommandeur II./NJG 100. On 1 December, I was promoted to Major and, in early January 1945, I achieved my 59th victory, an American Liberator which was attacking Graz. But the general situation was deteriorating and, for much of the time, there was little organisational control in our south-eastern sector.

In March 1945, one squadron was dissolved and over half of our ground crew and most of our aircrew were sent to fight alongside the Army. There were just 11 aircraft remaining when, on 10 May 1945, we went into American captivity. A week later, we were handed over to the Red Army and I did not see Germany again until January 1950.

My best experiences as a night-fighter pilot were spent as the Squadron Commander of 8./NJG 3. During the period September 1943 to April 1944, we were based on Luneburg Airfield, an old peacetime airfield that was built accordingly. As we were the only squadron there, with no superiors on station, all of the airfield personnel were at our disposal and we were, therefore, very well looked after. Our relations with the local people were also very good. Despite the beginning of the great air offensive against the German cities, our spirits were high and we still believed in victory. We also had the latest mark of the Bf 110, an aircraft with which we had plenty of success, especially as Luneburg was en route for the RAF bombers heading for the German hinterland.

i commenced my night-fighting career flying the Ju 88, an aircraft which was sufficiently agile for this purpose, had a good rate of climb and an endurance of over three and a half hours. Its air-cooled radial engines were also relatively insensitive to enemy fire. For a while I flew the Dornier 217, a heavy aircraft designed purely as a bomber, with a consequent poor rate of climb and limited manoeuvrability. Its endurance of over 5 hours made it useful for missions over the sea, but it was not a popular aircraft. I personally thought it was useless as a night-fighter.

In February 1943, I changed to the Messerschmitt Bf 110 which, despite its unsuitability for daytime operations, was the best night-fighter available until the late summer of 1944. It had a good rate of climb, a three and a half hour endurance, was sufficiently manoeuvrable, a good instrument flyer and was well armed. In November 1943, I changed my F-4 for a G-4 model, which had a full night-fighting radio fit and the upward firing ‘Jazz Music’ cannon. I got 42 victories in this aircraft, until it was destroyed on the ground by a daylight raid.

My last operational aircraft was the Ju 88G-6, which had similar flying characteristics to the Bf 110, but was faster and had a 5 hour endurance. 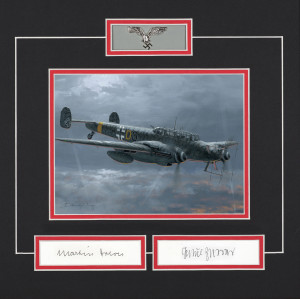