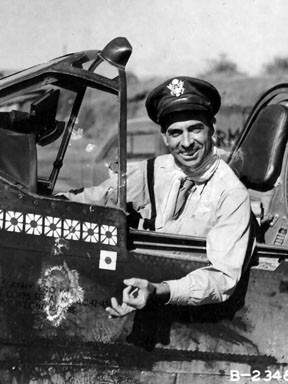 The Words of Robert Scott.

I remember always being jealous of birds: they flew! My boyhood idols were Billy Mitchell and Billy Bishop. My head was always in the clouds, but even so I managed to get accepted at West Point in 1928—mainly to assuage my father’s disappointment that he had a flyer on his hands. In 1932, I transferred to the Air Corps, where I finally won what I had been seeking for many years: my wings. It was just the start.

From the very first I was a time hog, racking up as many hours as I could to build time. I figured that this was the only way to gain an edge as a fighter pilot. In February 1934. The Army took over airmail operations from the airlines, and that month alone I flew some 200 hours— despite being officially ‘grounded’ for being a hog. Then came a succession of jobs. One of them was armament officer with the 78th Pursuit Squadron in Panama for the 19th Composite Wing. At one stage I was charged with mis­using about a million rounds of ammunition. I had been shooting at everything which moved. The Audubon Society would have hated me. But I became a mighty good shot.

Back in the USA I was a flying instructor at Randolph Field, Texas, which helped me put thousands of hours more in my logbook. Then. President Roosevelt announced the Civilian Flying Training Plan and I was given the honor of opening the Cal-Aero Academy in Ontario, CA., the largest flying school in the country. I made it from lieutenant to lieutenant colonel in one year.

Then came a shock: I was told that at age 33 I was too old to live my dream of being a fighter pilot. I resorted to writing countless letters over the heads of my superiors to Congressmen and Senators, to no avail. Rescue came when an acquaintance made it possible for me to misrepresent the fact that I had never flown a B-17—I hadn’t, but I said I had 1,042 hours—and I was assigned to a top secret mission. Named Acquila, its objective was the bombing of Tokyo, 24 hours after General Doolittle’s raid from the carrier Hornet. The idea was to pinpoint the bombs on the fires Doolittle had started. It seemed like a one-way mission but it was stopped in Karachi. By then I had proved I could fly anything!

I was then transferred to flying Gooney Birds (C-47s) over the Hump into China, supplying Chennault’s American Volunteer Group—the Flying Tigers. I met Chennault and finally convinced him to let me fly a P-40 Tomahawk. That was in April 1942. By then I was unofficially attached to the Tigers, flying between five and ten combat missions a day over Burma, often on “guest missions” with the AVG. Finally, the Tigers were inducted into the US Army Air Corps on July 4th 1942 and I became the commander of the 23rd Fighter Group of Chennault’s China Air Task Force, in Kunming.

Within six months of that, I had notched up 13 confirmed victories, plus nine probables (gun cameras had not yet arrived in China.) Those probables were later confirmed by US Inspectors with Chinese Warning Net, leading me to a final tally of 22.

In 1943 I was ordered home: I was told that I was too valuable now to risk being captured! I knew too much, they said. Back in the USA I was assigned to the Army General Staff as Deputy for Operations, School of Applied Tactics, a job which quickly turned into giving a series of speeches across the country. Then I started negotiating to return to combat and to Chennault in China. The way it was done was this: I managed to persuade the Navy to let me become responsible for delivering 100,000 High Velocity Aerial Rockets it didn’t want to China. Part of the deal was that I would get to use them and I became a train-buster, flying P-51 Mustangs. At the end of the war I was still putting hours in my book. I flew over the USS Missouri during the Japanese surrender ceremonies.

There were many who thought the American Vol­unteer Group were unruly and undisciplined. To these statements I always remarked that I wish we had ten such undisciplined groups, for then we would have destroyed some three to four thousand enemy aircraft.

My first actual combat aircraft was to have been the B-17 Flying Fortress. I was to have flown it against Tokyo on April 19, 1942, following the famous Doolittle raid. Luckily for me the operation was cancelled. I then flew the Curtiss P-40E Tomahawk with the Flying Tigers. Later I was in the North American P-51 Mustang carrying out strafing runs. I flew a total of 388 combat missions in both types, and a total of 964 hours. The P-40E was a heck of a warbird. I managed to wear one out completely on combat duties.