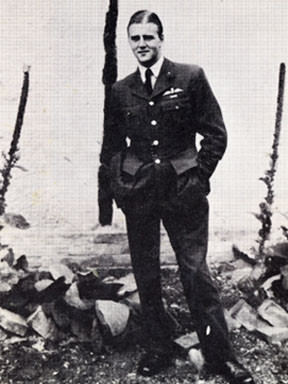 There was always much competition to get into the squadrons of the Auxiliary Air Force and I was proud to be invited to join 602 (City of Glasgow) Squadron in 1934 as it was the original squadron of that very exclusive Force. We flew delightful, agile bi-planes, the Hawker Harts, during a time described as The Golden Age of Flying” when our gaily-painted, stubby aeroplanes were a pleasure to handle above the grass airfields and there was plenty of time to perfect the art of pure flying.

Together with pilots of 603 (City of Edinburgh) Squadron, I took part in the first historical fighter engagement over the United Kingdom on 16th October 1939, when German bombers attacked Naval Units moored near the Forth Bridge. My first victory was at night when I attacked a Heinkel bomber caught in the searchlights-it crashed into the sea and the crew were taken prisoner.

On 14th July 1940 I realised one of my life’s ambitions when I was promoted to command the squadron. Soon afterwards we moved to Westhampnett (now the Goodwood Racing Circuit) and fought from there during that splendid summer.

The Battle of Britain was fought and won over the Channel; over the flat marshes of Essex and the sprawling mass of London; over the fields of Kent and Sussex; over the wolds of Hampshire and Dorset and, unlike previous battles of destiny-Waterloo, Trafalgar and the terrible roar and devastation of the Somme Bombardments, there was little sound or fury. People went about their business with little idea of what was taking place high in the sky. Usually all they saw was the ever-changing patterns of our white vapour trails, slowly changing form and shape, but sometimes they would see us as a number of tiny specks scintillating like diamonds in the strong sunlight of those cloudless days.

During those hectic months I shot down seven enemy aeroplanes, probably destroyed many more and was awarded the Distinguished Flying Cross. The most successful Scottish Auxiliary pilot was one of my colleagues, Archie McKellar, DSO, DFC and Bar, with 21 victories, who fought during the Battle but, alas, failed to return from an early morning patrol in November 1940. His fighter crashed into a garden in Kent, killing the pilot, while a Messerschmidt 109 crashed nearby.

I left the squadron in the following Spring and, in 1942, went to Malta to command the Krendi Wing (Spitfires), but unfortunately this tour was curtailed when I went down with the local fever. After further flying appointments I took part in the planning for D-Day, and later served on General Eisenhower’s staff.

It was a sad day for me when, in 1957, the Auxiliary squadrons were disbanded, for they had served with distinction during World War 11, being heavily engaged in the air over Dunkirk and throughout the Battle of Britain. They were to win further battle honours over the Atlantic, in Malta, Sicily, Italy, Burma, Normandy, Holland and Germany.

I finished my RAF career where it had begun-in Scotland-as Air Officer No 18 Group, Coastal Command and Air Officer Scotland and Northern Ireland.

Spitfires were the only types I flew in combat (Mk I 1939-41 and Mk V 1942- 43). However, I also logged many hours on Hurricanes and Mosquito’s, when commanding Stations and Flying Wing at OCU.

Having “grown up” in No. 602 (City of Glasgow) Squadron, I was particularly proud to be appointed a Flight Commander (B Flight) in October 1939 and subsequently to take over command seven months later, thus leading the squadron’s Spitfires through the Battle of Britain. 602 Squadron, which was the first into action over the U.K. in World War II, and claimed the first German aircraft shot down in the war, was later commanded by John Kilmartin, Al Deere, Pierre Closterman and Paddy Finucane.

I flew many types during the war, including the Fairy Battle, Gladiator, Blenheim, Walrus, Fairy Fulmer, Lysander, Wellington, BeaufIghter and Anson, all having their own varying disadvantages, but I have nothing but praise for the Spitfire, which I consider was the finest of all RAF combat aircraft. It was a thoroughbred through and through and I am proud to have flown them in action. It was certainly the right aeroplane in the right place at the right time. In all, I have flown over one hundred types during my flying career.