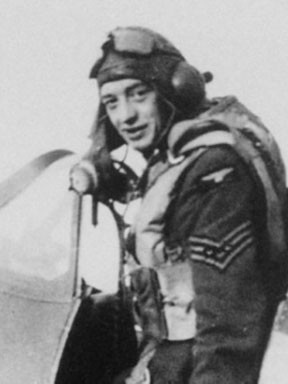 I always wished to fly and joined the R.A.F.V.R. as a Sergeant Pilot in the Spring of 1939. I started flying training on Tiger Moths on 24th June that year.

I recommenced training in 1940 on Magisters and Harvards. I then moved to 7 O.T.U at Hawarden and was introduced to the Spitfire I. I never experienced anything like the surge and power of the aircraft – I found myself halfway across Liverpool before I got the wheels up!

I joined 610 Sqn. at Acklington in October 1940 and was later posted to 616 Sqn. at Kirton Lindsey in December 1940. The Eagle Squadron was also based there—volunteer American pilots flying Hurricanes; a great crowd of chaps.

The Squadron moved to Tangmere in February 1941, joining 610 and 145, thus forming the Tangmere Wing. Douglas Bader joined us in March and decided to lead the Wing with 616 Squadron. He selected ‘Cocky’ Dundas and Johnnie Johnson to join him in the leading section of four aircraft. Looking around the dispersal hut his eye fell on me and he said, “What’s your name?” I stood to attention and replied “Smith, Sir” He immediately said “You’ll do – stick to me like glue and watch my tail“. I couldn’t believe my luck! Douglas was the perfect pilot—flew as if part of his aircraft, superb at aerobatics and the finest leader I ever experienced.

It was Douglas Bader who perfected the four aircraft abreast formation, known as the ‘finger-four’ which was so much more efficient than the earlier ‘four in line astern’. I say this with much feeling as will any pilot who ever flew as ‘tail-end Charlie’!

July 2nd, 1941, we were flying an offensive patrol over France combined with bomber escort to Lille. There was a great deal of enemy fighter opposition and a considerable amount of dog fighting during which the squadron destroyed three and damaged two. My first confirmed enemy aircraft destroyed—an Me 109 which shed various bits and pieces of metal after two long bursts from astern. It was pouring heavy smoke and proceeded almost vertically downwards. A further Me 109, which came in to attack me, overshot and I got in a quick burst which did a certain amount of damage. As always, in these dog fights, the sky was full of aircraft one moment and practically devoid of them the next.

On August 9th I was grounded due to a heavy cold and my place as Douglas’s No. 2 was taken by Sergeant Geoff West. What one had always dreaded happened – Douglas didn-t return with his squadron from the sortie over northern France. Geoff was a superb pilot but, nevertheless, I have always felt as guilty as hell at not being in the air that day.

November 8th was my first combat experience against Fw 190’s when a bunch of them jumped us from out of the sun, demonstrating a new Luftwaffe fighter aircraft that had quite an edge over our Spitfire IIs. We lost our Wing Commander Scott during the dog fighting which ensued.

In November 1941 I was posted to 58 O.T.U., Grangemouth to instruct new Spitfire pilots, and in June 1942 I joined 308 Sqn, United States Army Air Corps at Atcham. My job was converting American pilots to Spitfires, teaching formation flying and dog fighting. I found the American pilots cheerful, able, and quick to learn.

In August 1942 I was promoted to Flight Lieutenant and posted to 93 Sqn. and took part in the invasion of North Africa. We operated from Maison Blanche aerodrome, initially then moved to Bone and immediately thereafter to Souk-el-Arba. Operationally it was a very active period, patrolling, dog fighting, attacking enemy ground positions and escorting bombers. After this hectic period I was posted back to U.K. in January 1943, again to instruct on Spitfires, and ended the war instructing at No. 5 B.F.T.S.. Clewiston. Florida.

I only saw operational service on one aircraft type—Spitfires. In the U.K. I flew Mark IIa and IIb and also Va and Vb. In North Africa I flew the Vb clipped wing which I found a remarkably good aircraft with extremely good manoeuvrability. The Spitfire was a quite superb aeroplane and in all the time I flew it I was never once let down by engine failure.

The highlight of my time in Fighter Command was spent flying Number 2 to Douglas Bader, leading the Tangmere Wing and flying with ‘Cocky’ Dundas and Johnnie Johnson in 616 Sqn. We saw a great deal of action over both the U.K. and on sweeps over France. Bader was an exhilarating leader and a superb pilot. Morale of the Squadron and the Wing was extremely high and not one of those of us who were privileged to fly in those days will ever forget 9th August, the day on which Douglas did not return.

I owed not only whatever tactical flying ability I may have had to Douglas, but also very many examples and lessons of leadership which stood me in good stead in later life. 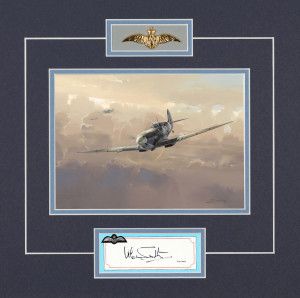 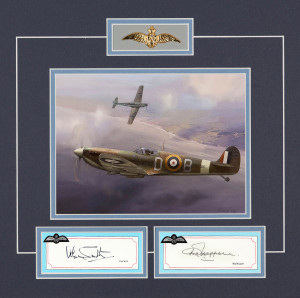 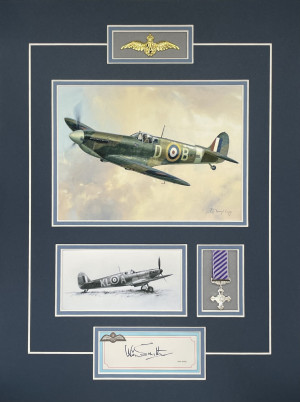