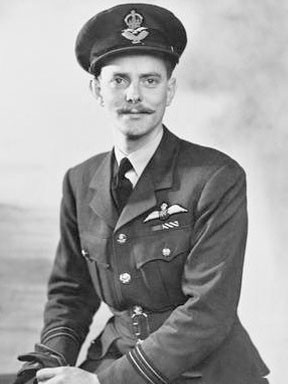 Unlike the Fighters, Bomber aircraft were flown by crews which spent the major part of their operational time over enemy territory flying through strong defences. Efficiency and teamwork, plus some luck, were vital to survival and success. My wartime experiences are inseparable from those of “OUR CREW” or “WE”.

After normal basic training on Tiger Moths and Oxfords in 1940 and then a Hampden OCU, a posting to 455 RAAF Squadron followed in 1941. Soon I was teamed with two fellow Australians who had been trained under the ETS in Canada. Jack Leggo (later Sir Jack) a Navigator and Toby Foxlee a Wireless Operator/Air-Gunner, plus Sgt. Tam Simpson of the UK, a rear Air Gunner.

We started by laying mines off Borkum, then bombing sorties to Emden, Hamburg, Munster and Cologne. Next some mining, then an attack on the battleship Schamhorst at Kiel after flying through hail and lightning, with heavy ice on the wings and aerials, muting the radio. Navigation was by maps and dead-reckoning in cloud. After five more sorties to Ruhr targets, 455 RAAF Squadron was moved to Coastal Command but our ‘experienced crew’ remained in Bomber Command to convert to Lancasters with 50 Squadron. Conversion was via the Manchester and in one of these aircraft we took part in ‘Bomber’ Harris’s first 1000-bomber raids on Cologne, Essen and Bremen. That Manchester had no mid-upper turret so Toby Foxlee removed an escape hatch and sat on a swing with a K-Gun in the opening. Cologne was top priority and, for the first time, ‘Gee’, a new radar navigational aid, was available and visibility was good. Our crew had been increased to Manchester crew size by RAAF Sgts O’Neill and Smith. And so onto Lancasters with the original crew of four, plus two, for the originals to complete a first tour of 34 sorties.

In March 1943 Wing Commander Guy Gibson asked if I would join him for a special task. Yes, if our original crew of four could be had. The later members had been lost. In late March we arrived at RAF Scampton to train for the Dams Raid and as replacements chose Bob Hay (Bomb Aimer) Van Whittaker (Engineer) Chambers (Radio). The ideal night was 16/17 May 1943.

The order of attack on the Mohne Dam was Gibson’s crew first, Hopgood’s second, ourselves, Young’s, Maltby’s when the Dam crumbled and flood water rolled down the valley. Others breached the Eder and attacked other Dams. Eight of the nineteen crews were lost. The Guy Gibson VC book gives accurate details.

In September the CO was killed leaving only five of the original crews. I was made Acting CO.

In February orders came to attack the Antheor Railway Viaduct on the French Riviera. Leonard’s crew and ours were to mark for a small force carrying heavy bombs. Leonard’s aircraft was caught by searchlights and bursting flak well above which allowed us to slip inland and dive down a valley to cross the Viaduct at 50 feet. A moment before releasing the 12,000 lb bomb, a German shell hit the nose and killed Bob Hay and severed all the bomb release wiring. Whittaker was wounded in the legs. Only Simpson’s and Foxlee’s accurate return fire shot us free to emergency land later in Sardinia. At the AOC’s command that was our last Lancaster raid.

I applied for a transfer to fighters but Sir Arthur Harris replied “there is only one way out of Bomber Command” but agreed a posting to 515 Night Intruder Squadron. They flew the Mosquito Mk VI fitted with 4 x 20mm canon and 4 x .303 Browning MGs. Intruding meant patrolling around German night fighter airfields looking for aircraft landing or taking-off. Airfield facilities were strafed, also supply routes, flak positions and diversions created for our bombers. My navigator was F/O Smith.

Most of the last 9 months of the war were spent as a planner at 100 Group which intercepted enemy ground/air radio/radar signals and evolved jammers to negate them. I retired as an Air Marshal in 1974 after a rewarding life.

I could not have served on four better nor more closely knit Squadrons but because of Barnes Wallis’s Bouncing Bomb, and his huge Earthquake Bombs being assigned to 617 Squadron later, my prime affinity is to that Squadron. Wallis’s unique weapons brought with them needs to develop delivery and aiming accuracies never previously attained. The crews were normally very experienced before joining the Squadron, and inordinately dedicated.

Choosing a favourite is very difficult when there are two such strong contenders. The Mosquito was a great pleasure to fly, being so manoevrable, fast and versatile, but I think the aircraft in which we achieved most was the Lancaster. 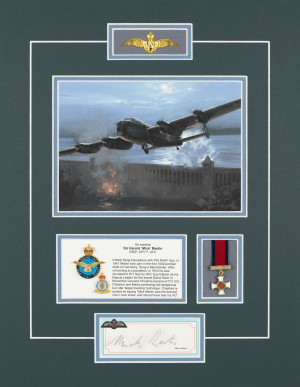 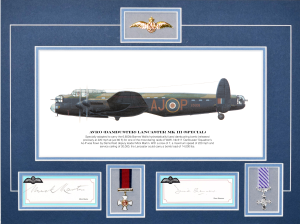 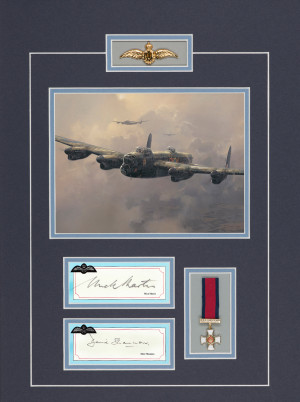 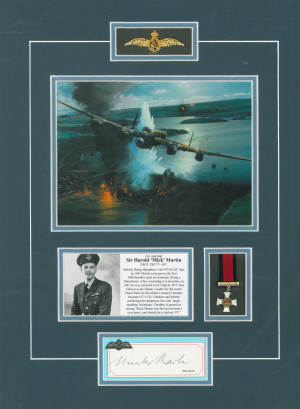