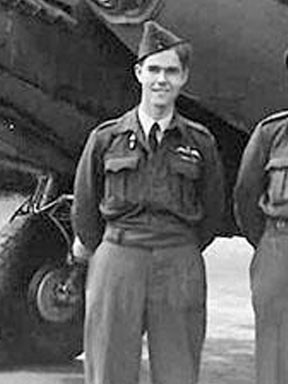 I joined the Royal Air Force in 1940 and eleven months later left my operational conversion unit as a sergeant pilot to join my first operational squadron, No. 114 Squadron, flying Blenheims.

After 12 operations, mostly at low level against shipping off the Dutch coast, and against targets in Northern France, my crew and I were posted to the Middle East – but never reached there! On arrival at Malta we – with other transit crews – were immediately allocated to No. 105 Squadron who were on the last week of a three week detachment at Malta. We were then transferred to the remaining Blenheim Squadron at Malta, No. 107 Squadron, and stayed with them until a relief squadron arrived in January 1942.

I was commissioned at Malta when 107 Squadron had lost all their officers, and for a short time was the only officer, other than the CO, in that Squadron. I completed 45 operational sorties, mostly low level attacks against shipping taking supplies to Rommel’s armies in North Africa, and was awarded the DFC at the end of that tour of duty.

Early in 1943, I became one of the first three Mosquito instructors in the Pathfinder Force and eventually moved into the Light Night Striking Force with No. 571 Squadron. A short term as flight commander of No. 128 Squadron was followed by promotion to acting Wing Commander to form No. 163 Squadron. I was awarded the first bar to my DFC for a low level moonlight mining attack from 50ft on the Dortmund-Ems Canal and a second bar to my DFC for tossing a 4000lb bomb into the mouth of a railway tunnel during the final German Ardennes offensive. I completed in all 103 bombing missions including 22 attacks on Berlin and at the end of World War II was awarded the DSO. Throughout my time on Mosquitos my navigator was Tommy Broom (no relation) and the “Flying Brooms” were an inseparable combination.

I remained in the Royal Air Force after World War II, and in common with many other young Wing Commanders was reduced in rank, first to Squadron Leader and finally in 1949 to Flight Lieutenant, in accordance with peace time rules for the much smaller Royal Air Force. The climb back started in 1950 and I was promoted to Air Marshal in 1974 to become the first serving officer to be appointed to the Board of the Civil Aviation Authority. I retired from the Royal Air Force in 1977.

I served in six Squadrons during World War II, but No. 107 Squadron at Malta sticks out most vividly in my mind. The Squadron went there for a three week detachment, but remained in Malta without relief for nearly 5 months. Very few of the original crews survived the detachment, The Blenheim was the only aircraft available in 1941 to carry out low level precision attacks on shipping carrying supplies across the Mediterranean to Rommel’s troops in North Africa. Our losses were high – an average of one crew per ship left sinking or damaged – yet none ever questioned the job we had to do. I recall one Australian pilot with his aircraft damaged and on fire and bound to crash, deliberately flying his crippled aircraft into the side of the ship he was attacking. Such was the calibre of the Blenheim crews.

My 103 operational sorties were confined to Blenheims and Mosquito bomber aircraft. The Blenheim was obsolescent at the time, but the all-wooden and unarmed Mosquito was probably the most advanced and flexible aircraft of its time. Berlin and back took only four hours and the Mosquito was thus able to operate when poor weather forecasts prohibited lengthy flights by slower aircraft. At one period in 1944/45 Mosquitos attacked Berlin for 25 nights running. At 25,000-28,000ft the German fighters couldn’t touch us at night. A remarkable aircraft – a great credit to the designers and manufacturers. 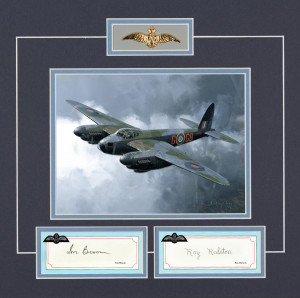 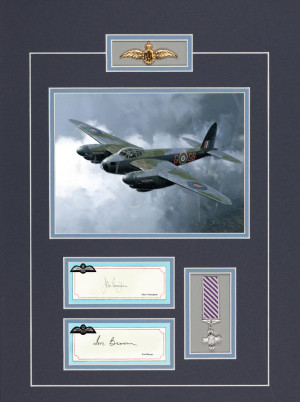