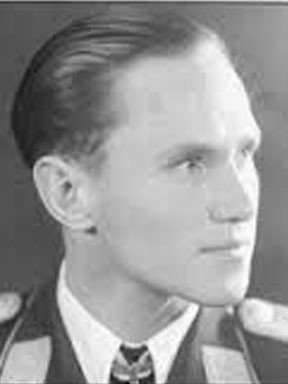 The words of Walter Krupinski

When war broke out on 1 September 1939 I was still in labour service, but was discharged a few days later. I soon received my military and flying basic training at the Air Warfare School at Berlin-Gatow. I then underwent fighter pilot training in Vienna, flying the He 51, Ar 58 and Me 109B and D, finishing in October 1940. I was then transferred to JG 52, firstly to a supplementary squadron and then to 5 Squadron which was based at Maldegem, later Kaywyk, then Ostend.

My first enemy encounter was with a Bristol Blenheim which was returning from France after a reconnaissance mission. On standby at Ostend sat Lt Barkhorn and Lt Krupinski. After taking off, we immediately recognised the aircraft over the Channel, but despite shooting off our entire supply of ammunition, the Blenheim returned home safely – so poor was our shooting at that time. Later, flying 30 missions against England during the Battle of Britain, I often had contact with Spitfires and Hurricanes, but couldn’t shoot anything down. My first aerial victory came many weeks into the Russian campaign, a DB 3 bomber south of Leningrad. By the end of the year, I had just 7 victories from many opportunities.

After the Gruppe had been refurbished in Germany, I began my ‘improved shooting programme’ and by the second year of the Russian Campaign (1942), I had 66 victories, for which I received, in May 1942, the Reichsmarschall’s “Honour Goblet”. On 22 August, I was awarded the German Cross in Gold and, on 29 October, the Knight’s Cross.

Most of the aircraft I had shot down were Yaks and Laggs, but there were also a few Pe 2 and Boston bombers, as well as a few II 2 and II 4s. Our operational area was Southern Russia, from the Crimea to the Caucasus and Stalingrad.

My last mission in 1942 was flying escort for Ju 52 transport aircraft to Stalingrad. After a stay in hospital, I enjoyed 3 months as a flying instructor in the supplementary squadron of JG 52, in Cognac and La Rochelle, before, on 15 March 1942, I took over 7 Squadron JG 52 at Taman on the Cuban Bridgehead.

My most successful day was 5 July 1943, at the beginning of the Battle of Orel. On this day, I shot down my 80th to 90th victories. On 12 October, I shot down my 150th opponent and on the following day, with my 154th victory, I scored the 1,000th success attributed to 7 Squadron JG 52. On 2 March 1944 I was, after 177 victories in over 1,000 missions, decorated with the Oak Leaves to the Knight’s Cross and transferred to Germany for the “Defence of the Reich”.

After a short assignment as a squadron leader in I./JG 5, I was appointed Kommandeur of II/.JG 11 in Hustedt near Celle, after which, on 6 June 1944, we were transferred to the Invasion Front, firstly to Beauvais, then to Mons-au-Chaussee. Up to this point, I had achieved 14 aerial victories in the West, which included 9 Mustangs and 4 Thunderbolts. After my Me 109 exploded in mid-air, resulting in another stay in hospital, I took command of III./JG 26, where I remained until 25 March 1945. Five days later, General Galland and Oberst Steinhoff collected me from the Fighter Pilots’ Rest Home in Bad Weissee and took me to Fighter Unit (JV) 44 at Munich-Riem, where I flew my last operations on the Me 262.

In total I flew over 1,100 missions, was wounded 5 times, bailed out 4 times, had many belly and crash landings and achieved 197 aerial victories.

Of the five wings I flew in, it was JG 52, which left the greatest impression on me. I flew in this wing from late 1940 to early 1944, with 6 Squadron for two years, and over a year in command of 7 Squadron, achieving with them 66 and 111 victories, respectively. I also scored the 900th and 1,000th victories for 7 Squadron, an achievement which I believe was only matched by two other Luftwaffe squadrons. During my time with JG 52, I was wounded 3 times, took to my parachute twice from burning machines and had numerous belly and crash landings, one of which was in a mine-field in Russia, which resulted in spectacular explosions.

I flew over 1,000 missions and scored over 190 victories in the Me 109, flying models E,F,G and K. Therefore, for many years, I considered this the best that the Luftwaffe had to offer. When, at the beginning of 1945, I flew the Fw 190 D9 (long nose) and then the Me 262 for a month in JV 44, I knew that there were much better aircraft than the old, brave Me 109. The fastest of the breed was definitely the F-4 which I flew mainly in Russia. In the “Defence of the Reich” in 1944, I flew the Me 109 K-14 with methanol injection as a high altitude fighter to protect our heavy fighters, typically the Fw 190. But in spite of many improvements, the later marks of the Me 109 were always ‘lame ducks’, limited by many lumps on its profile, which no longer fitted the “old shirt”. This gave rise to its nickname, “The Bulge”.

The high point of my flying career was the last month of the war on the Me 262. Everyone knew that the war was nearly over, but a flying dream had become reality. 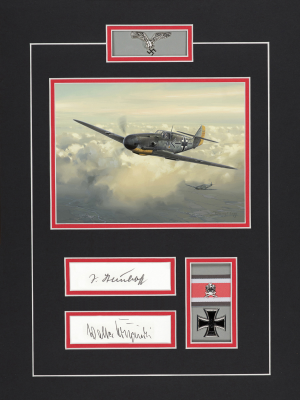 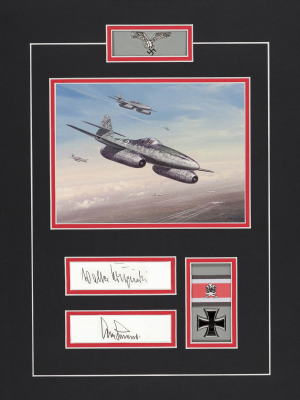