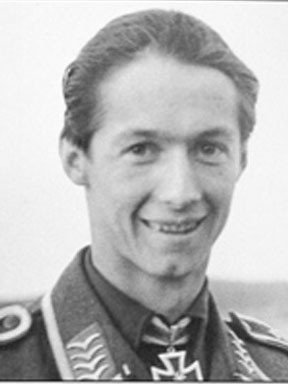 After a Catholic upbringing in the 1920s, I joined the Luftwaffe on 3 November, 1937. Pilot training followed and in Autumn 1940 I was posted to the training replacement Gruppe of JG 3 and in December was promoted to Unteroffizier. On 22 January, 1942, I transferred out of Erg. Gr./JG 3 to join 7./JG 5.

At the beginning of April, 1942, we arrived at Petsamo, on the Polar Sea Front and it was here, on 15 May, 1942, that I scored my first victory. The following month, on 5 June, I had a particularly good day when I shot down four Russian fighters. After that my progress was steady, such that my two victories on 14 April, 1943 took my total to 31. After another two months, I had added a further 13 aircraft to this total for which, on 24 June, 1943, I was awarded the German Cross in Gold.

Another memorable day came on 17 March, 1944 when I brought down seven Boston bombers and another five victories on 7 April brought my total to 84. I was awarded the Knight’s Cross the following day. The following month, on 25 and 26 May, I succeeded in shooting down ten aircraft and on 15 June, a further six successes took my total to the magic 100. Two days later, I had my most successful day, which was never surpassed by a JG 5 pilot, by achieving 12 victories in 24 hours. On the 27th and 28th of the same month, 11 more victories took my total to 125 and seven on 23 August 1944 took me past the 150 mark.

On 1 August 1944, I was promoted to Leutnant and given the leadership of the 10th Squadron, having spent the previous two months as a member of so-called Eismeerstaffel, the Polar Sea Squadron. On 30 September, I became the 616th German soldier to be awarded the Oak Leaves to the Knight’s Cross, after 171 victories.

Without doubt, the unit which left the greatest impression on me was the “Polar Sea” Wing, JG 5. It was in this Wing that I scored 198 of my confirmed victories. JG 5 did not have the tradition of some of the more established Wings and was not formed until 1942, when Gruppen were deployed to Kirkenes in northern Norway and Petsamo in northern Finland. Our main task was to support the mountain troops and prevent northern Finland from being occupied by Russian troops. We also escorted our own Stukas and bombers in their attacks on the Arctic convoys and the strategically important harbour of Murmansk. In the summer months, the sun never set and during the months of December and January, we flew in constant twilight. Also, due to fog and adverse weather conditions, it was often impossible for us to return to our home base and we had to divert to Norway or elsewhere. At the war’s end, JG 5 had accumulated a total of approximately 3200 victories, with a loss of approximately 380 pilots and 80 ground personnel.

But December, 1944 was a black month for JG 5. The had been sunk in a Norwegian harbor and our Kommodore, Heinrich Ehrler, a brilliant pilot and leader, was very unfairly made a scapegoat for this disaster and convicted – despite being a holder of the Oak Leaves to the Knight’s Cross and having been nominated for the Swords.

I spent November and December of 1944 in Germany, returning to northern Norway in January, 1945 for a short time. From there I led my Squadron against incoming British aircraft, where I was able to score a few more victories.

Shortly afterwards I joined JG 7 to train on the Me 262 and on 24 March, 1945 was appointed Squadron Leader of 3./JG 7. Flying the Me 262 in combat was a totally new experience, which initially took a lot of getting used to. With the very high speed of this aircraft, closing speeds, particularly with frontal attacks, were much higher, giving far less time for the attack. Also, the high combat speeds left wingmen scattered all over the sky and because of this, some of my jet victory claims were unconfirmed for the lack of a witness. In spite of this I was credited with a further eight victories flying the Me 262, including four B-17s. At the end of April 1945, I was shot down myself by American fighters and was forced to use my parachute.

I ended the war in the rank of Oberleutnant, having flown approximately 500 combat missions and been credited with 206 confirmed aerial victories. I became an English prisoner of war on 8 May, 1945.

During my first four and a half years of the war I only flew the Me 109, from the “Emil” to the “Gustav”. It was a fine machine and, during the early years of the war, was more than the equal of anything the enemy had to oppose us. The “F” model was perhaps the best of the breed, due to its streamlined shape and consequent high manoeuvrability. However, its limitation was its lack of offensive armament – a step backwards from the “E” model which carried a cannon in each wing. The “G” model, which was the answer to this, had increased calibre machine guns mounted above the engines which gave the aircraft its characteristic bulge and hence its nickname. Some models carried under-wing cannons. Extra armament meant extra weight and hence the need for strengthening the wing roots. Following earlier disasters in combat additional strengthening was introduced, which in turn meant more weight. Increased drag was nearly always countered by more powerful engines, but manoeuvrability was impaired, and gradually our trusty Me 109s lost their edge over the opposition. The Me 262, however, was a different proposition altogether and was a joy to fly, giving its pilot a feeling of almost complete superiority – even despite the overwhelming number of opposing machines. 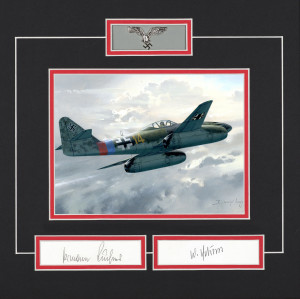 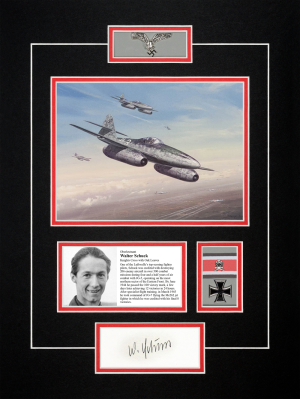