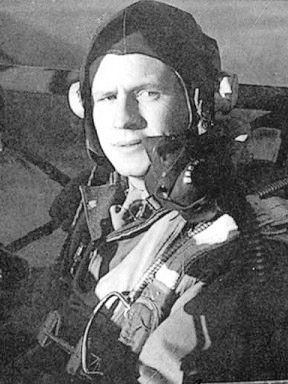 I was commissioned 10 March 1943 at Williams AFB, Arizona and was assigned to the 38th Fighter Squadron, 55th Fighter Group at Paine Field, Washington. The Group had P-38 aircraft and we were training for escorting bombers.

We departed for England in August, 1943 and arrived at Nuthampstead near Cambridge in early September. Our training intensified during the next few weeks and our Group went on combat operations 15 October. Our mission was to provide long-range escort to the bomber forces. We usually escorted them beyond the range of the P-47s and other escort types. We continued this task alone until another P-38 Group, the 20th, became operational in December, 1943.

Needless to say it was a difficult task because of aircraft limitations and engine problems. Sometimes I thought that the only good we were doing was that we were taking some of the German fighters off the bombers. I was shot up twice in November and on one mission I returned on single engine with more than 120 holes in my aircraft. The German pilots in those days were extremely capable. The first FW 190 I saw attacked a box of bombers head on and inverted. I wouldn’t fly through a bomber formation from the rear as they aren’t known for their formation flying!

I had joined the 38th Squadron right out of flying school and started flying the P-38. Our Squadron went on combat operations 15 October, 1943 with our primary mission escorting the different types. Our orders were to stay with the bombers at all costs and we weren’t permitted to pursue. This order wasn’t rescinded until Februarys 1944 at which time we were able to be more aggressive which is the name of the game for a fighter pilot.

I got my first Me 109 in January 1944. As a defensive maneuver about 12 of us were in a double Lufberry while about 30 Germans were attempting to break it up. One of them got on the tail of a P-38 and I latched on to him and blew his tail off. I got one more in March 1944 and three in April which made me the first P-38 Ace in the 8th Air Force.

I flew one combat tour in the P-38 and one in the P-51 in the E.T.O. I got my 5 victories in the 38 and considered it a good airplane. However, I believe the P-51 was a better combat aircraft against German fighters. I never sweated fuel in the 51 and I always felt that I could do anything the German could do. At altitude, above 25,000 ft. the German could initiate combat and break it off anytime against the P-38. We were the initiators in the P-51.

I finished my first tour of operations in April and was assigned as operations officer of a replacement training unit at Goxhill in Northern England until D-Day happened at which time I volunteered for another tour and joined the 334th Fighter Squadron, 4th Fighter Group at Debden. I was really-looking forward to flying the P-51 with this well known Group for I believed the 51 was a much better airplane against the German than the P-38. There wasn’t anything he could do that I couldn’t stick with him, plus the fact that I never once sweated fuel in a P-51.

I got in several scraps and on 5 September 1944 had to bale out of a Mustang due to engine failure. The French Under­ground picked me up almost straight away and managed to get me back to England the same day.

I was the Squadron Commander of the 39th when the Korean War started and we commenced combat operations on 3 July, 1950 in F-80s. However within two weeks we converted back to P-51s because it was a better ground support aircraft as it could stay over the target area for a longer period.

Our mission was ground support and interdiction and while on an interdiction mission on 30 November, 1950 I was shot down by ground fire and had to belly in wheels-up in a burning airplane. I was captured immediately by Chinese troops and was a POW until release on 7 September, 1953.

Being a POW is a thoroughly degrading experience. Much has been written about treatment by the communists and I know that all of it is bad. As a Senior Officer I was blamed and punished for infractions of others. Eight months of solitary confinement being one such punishment.

I continued my career after release from POW status with duty tours in the Training Command before going overseas again as Director of Oper­ations of the 66th Tactical Reconnaisance Wing in France from July. 1959 to July, 1962 flying RF-101s.

Returning to the States I spent three years in Washington, D.C. with the Federal Aviation Administration until I was transferred to Operations at Tactical Command Headquarters at Langley AFB, Virginia in July, 1965. I was fortunate to spend only one year there before being transferred to Luke AFB, Arizona as Vice Wing Commander in July, 1966 and was assigned to fly the F-104. I was made the Wing Commander in June 1967 and continued in that position until I retired 1 November, 1967. 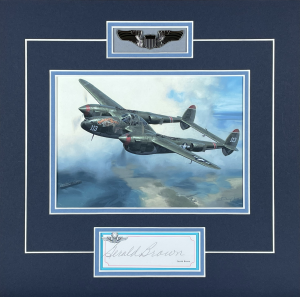