The words from Marion Carl.

From the time I first saw an aeroplane in the air I wanted to be an aviator. As a farm boy I went to Oregon State College and graduated in 1938 with a degree in mechanical engineering with aeronautical option. As a result of four years ROTC I received a reserve commission in the Army Corps of Engineers. Near the end of my senior year I took the physical examinations for both the Air Corps and Navy flight programs. I chose the Navy as the quickest way to get flight training and shortly after reporting for duty opted to be a Marine.

I received my Wings and commission on December 1, 1939, and was assigned to VMF-1 flying F3F-2 Grumman fighters. Six months later I was sent back to the training command as a flight instructor. While there I was augmented into the regular Marine Corps. In August of 1941 I reported to VMF-221 at NAS North Island. San Diego, for duty, flying F2A Brewster Buffalos. On December 8, 1941, the squadron boarded the carrier Saratoga and we arrived on Midway Island on Christmas Day. I was one of the few that remained there throughout the Battle of Midway.

On June 4, 1942, 19 Brewsters and six Grumman Wildcats took to the air to intercept the oncoming Japanese. Ten returned. I had a total of 5.6 Wildcat hours when launched into combat. Due to a mix-up on take-off only three Wildcats were together and were vectored to intercept the bombers. We made an overhead pass and that was the last time I saw a friendly aircraft until I landed. The next thing I knew I had a Zero on my tail. Only a friendly cloud saved me as I soon found out that I could not out-manouever him. Later I found a Zero by itself and shot it down. I landed with eight holes in my plane. When another scramble came a short time later one other plane and myself were the only two to take to the air. It was a false alarm, the Japanese carrier and their aircraft were under attack by the Navy carrier task force.

Two weeks later I returned to Hawaii and joined VMF-223. I was now a Captain. On August 20 the squadron departed the jeep carrier Long Island and we were the first fighters on Guadalcanal. Initially it was a primitive existence. We were short on everything—food, fuel, ammo, and spare parts. A lot of it was flown in using C-47 aircraft. On many occasions six Wildcats were the maximum that we could put into the air, and we were always out-numbered. Once engaged in a flight it was every man for himself. In less than two months we lost half our pilots.

All of my combat flying in World War II, except the two missions at Midway, was with VMF-223. During the first tour at Guadalcanal in Wildcats we operated on a day-to-day basis with a shortage of fuel, ammo, and spare parts, sometimes barely able to get six planes into the air and always outnumbered by Zeroes that could out-perform us. The second tour as CO and with Corsairs the situation was reversed. We outnumbered the Zeroes with better planes and had them on the run. The main problem was finding enemy aircraft to engage. The main thrust of the war had moved further west.

Most of the aircraft that I shot down, 16 out of 18, was while flying the Wildcat. It was a very sturdy aeroplane but a Zero could rather easily out-manouever it and out-climb it. It took 45 minutes to get a Wildcat to 30,000 feet. It could out-dive a Zero and the pilot had full control at terminal velocity. The pilot of a Zero didn’t. At low altitude there was no way of getting away from one.

On the second tour with Corsairs it was possible to Climb with Zeros and to out-run and out-dive them. Most of our engagements were over or near Rabaul and we normally out-numbered them. The war was winding down in that area and a short time later Japanese aircraft abandoned the area.

We were then relieved and returned to the States. During this period I shot down 15 Zeroes and bombers and got shot down once.

At home I was promoted to command the squadron re-equipped with new F4U-1 Corsairs. In July. 1943, we embarked and again headed west. First stop was Midway for two months for training. Eventually we ended up at Vella LaVella and started flying over Rabaul. The war was beginning to wind down in that area. I shot down two more Zeroes over Rabaul and was then transferred to group. This terminated my combat flying for the rest of WW2.

In January, 1946, I reported to Flight Test, Naval Air Test Center, Patuxent River, Maryland. There I was one of the first Marines to check out in jets and helicopters receiving the No. One designation as a Marine helicopter pilot.

In 1947 I took command of VMF-122 at MCAS Cherry Point, NC, which a few months later was the first squadron to receive jets, the Phantom 1. In the spring of 1948 I formed a jet acrobatic team and led it, putting on many exhibitions including the National Air Races at Cleveland.

In 1954 I headed for Korea but got there too late for combat. As CO of a photographic squadron in 1955 I flew photo missions over Fukien province of Red China. In 1956, now a Colonel. I was CO of an aircraft Group at MCAS, El Toro, California. Next came the Air War College, then two years with the Joint Staff in the Pentagon. This was followed by two years in HQ Marine Corps. After five months, I was interim director of Marine Corps Aviation, at that time a two star billet. In 1963 I was transferred to MCAS Kanehoe Hawaii, as Chief of Staff of the Brigade, an air-ground team consisting of an air group and a reinforced regiment. Six months later I was promoted to Brigadier General and took command of the Brigade. In 1965 the Brigade was transferred to Vietnam and split up. I then became Assistant Wing Commander. During the eight months that I was in Vietnam I flew an occasional mission in the F4B-I, Phantom II, and the Huey gunship. While flying the latter I managed to corner and take prisoner a couple of Viet-congs.

In June of 1966 I reported to MCAS. Cherry Point, as Commanding General of that base and all bases Eastern Area. In 1967 I was promoted to Major General and the next year took command of the Second Marine Aircraft Wing and all Marine tactical aircraft on the East Coast. As Wing CG I checked out in and flew all the various types of more than a dozen different types of aircraft in the wing. After two years as CG I was transferred to Headquarters Marine Corps and retired in 1973. 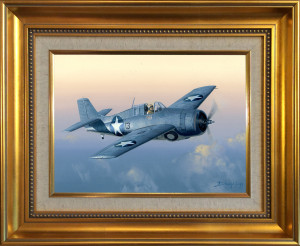