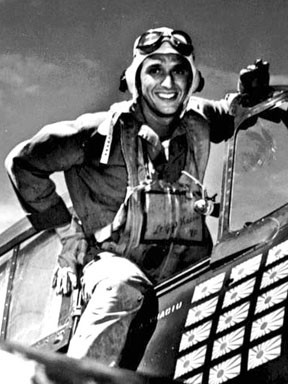 Born in East Chicago, Indiana, I won a scholarship to DePauw University, and sensing a war looming on the horizon, obtained a private pilot’s license under the government’s CPT (Civilian Pilot Training) program during the summer vacation between my junior and senior years.

Following graduation in 1941, I entered naval flight training just prior to Pearl Harbor and earned my wings in August, 1942. With planes and aircraft carriers scarce in the earlier phases of the war, I was finally given the opportunity to carrier-qualify on the USS Wolverine, a converted excursion ship, on Lake Michigan. I qualified on eight straight passes in my F4F Wildcat, demonstrating an early affinity for carrier duty. My first combat assignment was flying F6F Grumman Hellcats off carriers, learning my deadly trade for five months as wingman to Medal of Honor winner, Lieutenant Commander Edward H. ‘Butch’ O’Hare, Commanding Officer of Fighting Squadron 3 (later changed to 6).

It was while flying section lead in Skipper O’Hare’s division that I shot down my first enemy aircraft, a Japanese Zero fighter, at Wake Island in October, 1943. I got a reconnaissance Betty two-engine bomber at Tarawa, and on January 29, 1944 I qualified as an Ace after downing three more Betty’s over Kwajalein. The last of these was destroyed after a long, low-level pursuit with only one gun firing part-time at the Betty which was jinking and turning all the while. I notched three Zeroes and one Rufe in a wild dogfight at the first Truk raid on February 16, 1944 as part of a 72-Hellcat fighter sweep at the Japanese Naval fortress. It was a new and enjoyable experience for the F6F pilots . . . an all-fighter raid with no bombers to protect. That night. Air Group Six, aboard Intrepid, was forced to retire from the combat zone when the carrier was torpedoed by a Japanese Kate.

The Navy obliged by assigning me to Fighter Squadron Sixteen aboard Lexington, where I added two more Zeroes at the second Truk raid on 29 April. My 12th kill, another Betty snooper, was shot down north of Saipan on 12 June. Betty’s (big, fat-bellied, versatile Japanese bombers) were my prime preoccupation after being told that it was a Betty that had shot down Butch O’Hare on a strange night encounter. On June 14, participating in a strike against enemy shipping in the harbor, I sunk a large enemy merchant ship with a direct hit on its stern.

On 19 June I bagged six Judy dive-bombers in eight minutes in what has become known as the Marianas ‘Turkey Shoot’. Not many fighter pilots get a-once-in-a-lifetime occasion like this. The following day I shot down a Zero, my last enemy kill, and damaged another while flying escort for bomber and torpedo planes on a record, long-range strike against the Japanese fleet in the First Philippine Sea Battle.

My luck ran out early this time on December 14th 1944 when I was shot down by anti-aircraft fire on my second mission while strafing near Clark Field, Luzon, Philippines. After parachuting to safety, I spent the next five weeks with the USAFFE guerrillas and was given the honorary rank of Brevet Major while with them. For the final week of this episode, I found myself in command of 180 men, dodging Japanese to meet General McArthur’s advancing Americans. I marched into an American camp sporting a Luger and carrying a Japanese sword. Forced to return home due to regulations, I would not be able to make the first Tokyo raid.

After surviving service on six carriers, two of which were torpedoed, two ditchings and two parachute jumps—to be known as Grumman’s Best Customer-—my war was over. I was the U.S. Navy’s one-time leading Ace for three months in 1944 and ended World War II as the fourth-ranking Naval Ace, having shot down 19 enemy aircraft and destroyed 21 more on the ground. For the last few months of the war I served as a test pilot at the Naval Air Test Center, Patuxent River, Maryland, helping evaluate tactical performances of U.S. and enemy aircraft.

After post-war staff duty in the Navy Department. Naval Post-Graduate School and shipboard duty, I received the ultimate desire of all fighter pilots-command of my own squadron. As Commanding Officer of Fighter Squadron 51, I won the High Individual Air-to-Air competition in 1957 Naval Air Weapons Meet at El Centro, California, outshooting all Naval and Marine pilots for the top honor. I received the following message from CINCPACFLT: I am delighted to hear that you are top gun in jets in peace as you were with hellcats in war. Congratula­tions and well done, Adm Stump.

Throughout the war I flew the Grumman F6F Hellcat, which was designed to counter the Japanese Mitsubishi Zero, the dominant plane early in the Pacific war. The Hellcat gave us not only the speed, range and climb to compete successfully against the Zero, but it could dictate the rules of combat. It had a rugged dependability, a solid and stable gunnery platform, and distinctly was more of a pussycat than a Hellcat in its carrier operations. What better success could be attributed to the F6F than to acknowledge its kill-to-loss ratio of nineteen to one. 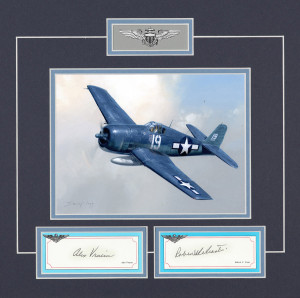 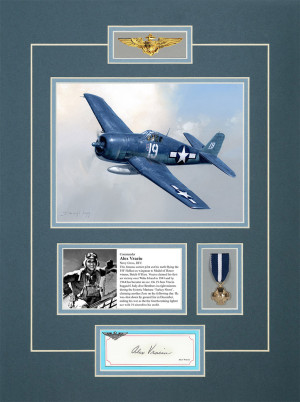