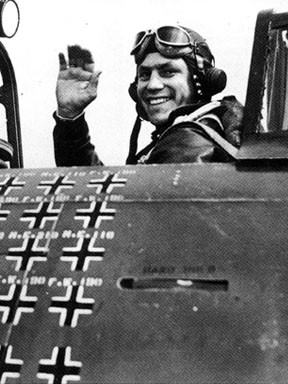 I did not like what I heard about the Nazis over-running Europe, so in early 1941 I left college and joined the USAAF. In July, 1942. after the usual flying training, I received my Wings and gold bars and was assigned to the 61st Fighter Squadron at Bridgeport, Conn., flying the first P-47B’s.

In these early P-47’s we had several that got into compressability dives. A couple lived through it, resulting in consid­erable testing by both the aircraft contractor and Air Force test pilots. Many claimed to have gone through the speed of sound but the absolute maximum that a P-47 could do was about .84 Mach number, straight down and full power.

On January 5, 1943, we left the States,soon after arrivng in England. We were briefly stationed at Peterborough where we awaited our P-47’s. A few pilots flew their first missions from this base. We then moved to Horsham St. Faith, Norwich, where, in April, 1943, most of us were initiated into combat. Later we moved to Halesworth, near the North Sea, from which I flew most of my combat missions.

On June 6, on my fourth or fifth mission, I broke all the rules and dived from my top cover position through our entire group, pulled up opposite our group commander and shot down the leading FW-190. On arriving back at our base. I first received congratulations and then a royal ass-chewing from my flight leader right on up through the group commander, ‘Hub’ Zemke. I deserved it.

This was the time when the Eighth Air Force was trying to prove their long-held doctrine of daylight strategic bombing—long abandoned by the RAF’s Bomber Command because of lack of fighter protection. Their losses were appalling. The Germans fully realized that once the Eighth could roam across the length and breadth of Europe they could lose the war. Consequently, they reacted strongly to these daylight raids and we were engaged in some of the heaviest air fighting of the war.

On March 6, 1944, Zemke announced that we were escorting Fortresses to Berlin: he would lead two squadrons of the famed ‘Wolfpack’ and I would lead the remaining two squadrons as two great fighter pilots from our group, Dave Schilling and Francis Gabreski, would not fly on this particular mission.

We made our rendezvous with the bombers near the Zuider Zee at 25.000 feet and we split into finger-fours and positioned ourselves several thousand feet out from our big friends. We had to make continual ‘S’ turns to stay with the slower bombers. Near the German border, Mike Quirk‘s eight P-47’s broke hard right. They jumped some Me 109’s and had quite a battle, but he would not give us his location. Maybe they wanted all the Huns for themselves!

We flew over the Dummer Lake—an unmistakable landmark,—and the three boxes of bombers we escorted flew smoothly and majestically on—dozens of Forts in each closed packed box.

Suddenly gaggles of FW -190’s attacked the bombers head-on. We were so close to our big friends that we had no hope of stopping the 190’s who, in ant case, ignored us and went straight for the bombers.

American and German fighters flashed together at over 600 mph. In a second, they were past us. We followed them into the bomber formations whose gunners fired at friend and foe alike. Enemy 20mm shells threw white bursts into the bombers and rockets left zig-zag trails as they struck the heavies.

The March air was filled with cries of warning and combat. One B-17 was cut in half and I thought ‘a few seconds ago those ten men were safe and sound’. Others dropped out of the lead box, trailing smoke, crippled. Several plunged earthwards, trailing black columns of smoke. A hundred parachutes filled the sky.

During that desperate, fierce fighting we did our best to protect our big friends and although my pilots shot down several enemy fighters the Eighth lost 69 bombers (690 men) on this first major daylight bombing of Berlin.

During my term of operations I was hit five times by enemy fire, three times by flak (with minor damage) and twice by FW-190’s, but I was never shot down and I was the first to exceed Richenbacker’s World War One record of 26 enemy aircraft destroyed in Europe. About this time, Dick Bong, the top scorer in the Pacific, had shot down his 27th Japanese aircraft. In late August, or early September, I received a letter from the Air Force stating that I had a 28th victory confirmed and I assumed that one of my ‘probables’ had been confirmed as destroyed. A month later Dick Bong also received credit for his 28th victory.

Some 38 years later the USAF informed me that the Records Department had made an error and that my official score was the 27. So that the number I came home with!

Led by one of our greatest aces, Francis Gabreski, the 61st was a terrific outfit and we took part in a great adventure—that of establishing air superiority over Europe—which played a major role in the defeat of Germany.

Our rugged P-47s, powered by the Pratt & Whitney R-2800, an 18 cylinder radial engine, could take a lot of punishment and still bring you home. We were penalized in range and on three occasions, I landed back in England on the first available strip when my engine quit halfway down the runway. The maximum distance we could make from our base in England, including external fuel tanks, was Braunschweig, about a hundred miles short of Berlin.

On one fighter sweep mission. I heard a thump in my engine and called to my wing man asking if he could see anything wrong with my airplane. He replied. “Negative —but the belly is covered with oil.” I continued the sweep with one of the top cylinder heads blown, landing with the group as normal.

I stayed with the 61st Squadron throughout my combat tour, except for the last month when I was transferred to the 62nd for an extension of my tour. I was promoted to Captain on March 15, 1944, after shooting down three enemy aircraft, bringing my total to 25 destroyed. Near the end of my extension, I shot down numbers 26 and 27, and, and was pulled from combat on May 8, 1944. I had flown 91 missions. Promoted to major on May 19, 1944. 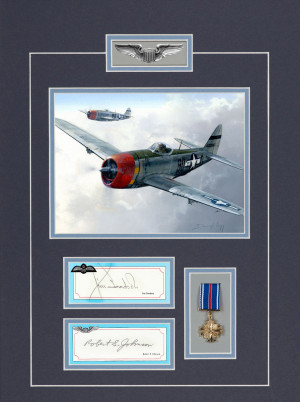 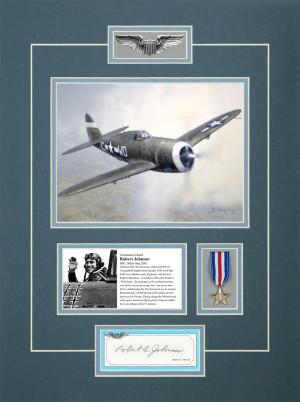