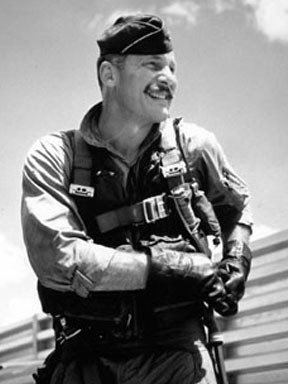 I grew up with combat aviation in my blood, my father having served as a pilot in France in World War I. He was responsible as much as anything else for my burning desire to be a pilot. He was always a strong advocate of air power and among many other achievements had been the commander of the 2nd Bomb Group, the first unit to operate the B-17. In 1940 I entered West Point, where I was able to play football successfully enough to become an all-American tackle in 1942, and captain of the Point team.

I received my wings on graduation in June 1943, and started operational training almost right away on the Lockheed P-38 Lightning fighter, an experience which seemed to take forever. In May 1944, however, I was assigned to England as a member of the 479th Fighter Group (434th Fighter Squadron). There we were stationed at RAF Wattisham. We quickly worked up to combat status, carrying out a lot of interdiction type flying over France and Germany prior to D-Day. June 5th and 6th were days never to forget. We were sent out to cover the Armada headed for Normandy, and were back the following day to provide escort for the actual invasion itself.

I had still to experience my first actual aerial combat, an event which took place early on the morning of August 13, somewhere close to Montmirail in France. This involved a surprise attack I was able to pull off when jumping two FW-J90s down at ground level. After a brief but hectic fight I was able to down both of them.

Things moved faster after that. Just a couple of weeks later my wingman and I attacked a group of Messerschmidt 109s—there were between 55 to 60 of them—and had a heck of a fight. The Me’s were headed for the bomber stream. The engagement began at 28,000 ft. over Muritz Zee. and, in the usual fashion for ‘such affairs’, finished down on the deck. By then, we were close to Rostock on the Baltic. During the battle, I was able to bag three Me109’s while my wingman was responsible for two more destroyed. But what I remember most from this was the trip home. It was long, slow and cold, my canopy having been shot away. Things worked out however, and this—only my second combat—resulted in the award of the Silver Star.

That Fall we converted to P-51s, and I continued on to fly a total of two combat tours, many of them characterised by engagements every bit as colorful. Many of the operations were long-range escort missions for bombers on deep penetration missions. We also had engagements with the Me 262 jet, and many of the missions involved strafing runs on German facilities and airfields.

By the end of the war I was commanding the 434th Squadron, and had made it up to the rank of major at the age of 23. My official score for the war was 24.5 combat ‘kills’, 13 of them in air-to-air engagements and 11.5 destroyed on the ground. I flew 107 combat missions during that period.

In World War II I flew Lockheed Lightning P-38Js and North American Mustang P-51Ds. In Southeast Asia I flew the McDonnell Douglas F-4C and D models of the Phantom. Since the time lapse between the two wars was rather extensive, I have to say I had two favourite aircraft, these being the P-51 and the F-4C.

I trained with the 434th Squadron in the US, and flew 107 missions with that unit out of RAF Wat­tisham from May 1944 to the end of the war. In that time I was responsible for downing 13 enemy aircraft, and destroying another 11 and a half during airfield strafing runs.

Soon after returning home, I joined the first P-80 jet group in the new USAF, and became wingman on the first jet aerobatic team formed by the service. 1946 was a great summer: plenty of air shows, and participation in the Thompson Trophy Races (jet division) at Cleveland, where I placed second.

My luck held, and I then served an exchange tour with Number 1 Squadron, RAF, at Tangmere. Here I was able to fly the Gloster Meteor, the RAF’s First operational jet fighter, and was also the first ‘foreigner’ to command a regular RAF squadron. I have nothing but warm memories of those times. Staff and command postings sent me to Germany, Libya, the Pentagon, back to England to command the 81st Fighter Wing at RAF Bentwaters, then on to Ubon, Thailand in September 1966. Here I took command of the 8th Tactical Fighter Wing at a time when the Vietnam war had come to the front burner.

Publisher’s note: Olds earned his second Oak Leaf Cluster to the Silver Star on January 2, 1967 during his famous “MiG Sweep”. The Third Oak Leaf Cluster was awarded for “exemplary airmanship, extraordinary heroism and indomitable aggressiveness” in a low level bombing run against the Thai Ngyen steel mill blast furnaces. By now he had replaced his earlier SCAT 1 fighter (a P-38) for SCAT XXVII, a McDonnell Douglas F-4D Phantom II. In all he flew 152 total combat missions, of which 115 were over North Vietnam. He is credited with destroying two MiG 21 fighters and two MiG 17s during bombing sorties over North Vietnam. He was awarded the Air Force Cross for his part in the Famous Paul Doumier Bridge raid.

His career ended with, on his own admission, “the rather strange choice” of Chief of Safety of USAF. Before that he served three years as the Commandant of Cadets at the Air Force Academy. He retired from active duty in 1973, and moved to Steamboat Springs, Colorado. 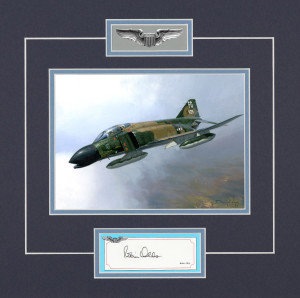 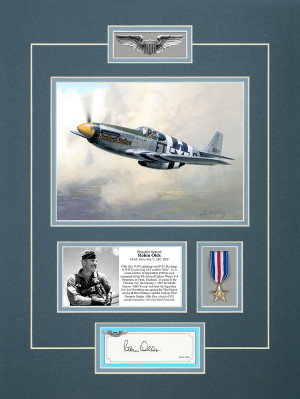